MTV’s Video Music Awards happened last night. Did you happen to watch? I didn’t. The annual show used to be must-viewing for me. When MTV was relevant and the internet was either non-existent or nowhere near as pervasive as it is today, the VMAs were an annual prompt for me to hunker down, watch with note-pad in hand, and stay up for a good portion of the night writing reflections on what the show reveals about our pop culture’s immediate past while offering a peek into where we’re headed. With culture serving – as we always say here at CPYU – as a map and a mirror, the VMAs offered a clear reflection of the direction the course of this world was taking as it shaped the beliefs and behaviors of the emerging generations.

Interestingly enough, nobody messaged or texted me this morning to ask what I thought. That was always happening in years prior with regularity. But not this year. . . as very few were watching. But this morning, after a good night’s sleep, I went online to see who this year’s winners were. . . and I can’t help but think that The Video of the Year Award marks another big leap that should wake us up to the fact that yes, the VMAs can still function as a significant cultural artifact that reveals a map that’s become normalized. . . so much so, perhaps, that it’s now seen as virtuous and proper to lift up a music video that might be one of the most vile and celebratory-of-evil music videos ever to jump into the mainstream public consciousness.

Please don’t miss the significance of what took place at the VMA’s last evening. A clear indicator of what we accept, believe, and at the very least celebrate in the mainstream music world won the Video of the Year Award last evening. It won. It beat out everybody else. Stunning. For the first time that I can remember, I can’t bring myself to even link to the winner. . . it is that decadent. I plan soon to write something on the Lil Nas X song, “Montero (Call Me By Your Name) video which won last night. It is an indulgent and extremely graphic depiction mixing homoerotic and satanic imagery in a mix that is a punch in the gut. It literally takes viewers into hell. 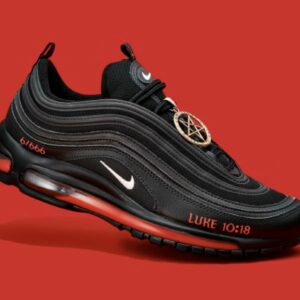 And yes, Lil Nas X is the same guy who back in March dropped 666 pairs of limited-edition $1000+ Nike Satan shoes to the public. . .and they sold out in a minute. The black and red shoes feature a pentagram, a reference to Luke 10:18, and a drop of human blood mixed in with the red ink that fills the shoe’s sole.

I told my own children today. . . “The video is horrifying.” in so many ways it is a call to diligent Gospel engagement with our kids.

God bless our children and our culture.