Generally speaking, I have regrets about the times I let my emotions take the reins from my brain. I’m also thankful for the times when God would graciously intervene in some miraculous way to derail my emotions and save me from utter disaster. . . kind of like that familiar movie scene where someone steps in to throw a much-needed slap across the face of a friend who isn’t thinking clearly, or maybe not thinking at all. Along with the slap comes a clear verbal command: “Get ahold of yourself!!”

Look back over the roadmap of your life and you’ll quickly see a map unfold, showing you where you’ve been and how you’ve gotten to where you’re at now. Each turn made or path chosen begins with facing a decision at intersection of some kind, an intersection that offers up one or more choices.

In today’s world, nobody would deny that life is a series of choices. . . perhaps thousands of choices a day. Early on in my own life, my Dad knew me well enough to see that my bent was towards feeling my way through life. “You’re way too emotional,” he would always say. Perhaps the proof of his evaluation was the irritability I felt. . . notice, I felt. . . every time he would issue that much-needed “slap”. Over time I began to see that he was right as I would lean into my emotions and make mood-influenced choices that I would sooner or later regret. I hope and trust that as I’ve gotten older I haven’t discounted the gift of my emotions, but that I’ve allowed them to come under control as I’ve realized there’s no more dangerous way to live than to embrace the modern-day creed/mantra, “Just follow your heart.”

Truth be told, I know in my head the kinds of things that I’ve felt like doing over the course of my life. This includes actions, reactions, decisions. . . all kinds of things that would lead not only to sin and consequential disaster, but to broken fellowship with God. It’s small consolation to know I’m not alone in this. But sadly, I’m meeting more and more people. . . young and old alike. . . who are eager and satisfied to follow rather than flee from the modern-day creed/mantra, “Just follow your heart.” I wish it was just the young. . . perhaps more emotional by nature simply because of where they’re at in the developmental process. But it is also those who are older. And many of those professing Christians who are older and are now parenting and youth-ministering, which results in nurturing kids into a heart-following feeling-driven life. And, I believe this is horribly ill-advised and ultimately disastrous. In fact, it is a kind of nurture that disciples kids into following their flesh (and even the world and devil) rather than following Jesus in the life of cross-bearing self-denial. 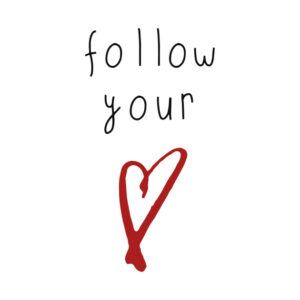 I am still haunted by a conversation I had with an influential youth pastor a few years ago. When I asked him about how he comes to conclusions on the big questions of life as a leader and teacher of kids, he responded, “I just follow my heart.” His answer did spark my emotions of sadness as I felt tears filling my eyes. I simply responded, “If I had chosen to live my life in this way we wouldn’t be having this conversation right now. I’d probably be in prison.” Why would we ever allow our emotions to shape our teaching and leading?

In his book Mere Christianity, C. S. Lewis offers up some keen observations and solid advice regarding the mind and the heart, reminding us that reliance on our emotions only undermines our faith. He writes, “Faith, in the sense in which I am here using the word, is the art of holding on to things your reason has once accepted, in spite of your changing moods. For moods will change, whatever view your reason takes. I know that by experience.” He continues, “Faith is such a necessary virtue: unless you teach your moods ‘where they get off,’ (you will be) just a creature dithering to and fro, with its beliefs really dependent on the weather and the state of its digestion. Consequently one must train the habit of faith.”

As I’ve read Lewis’ words, I realize that this is what my Dad was working to teach me. But how does one do this. Lewis goes on to lay it out in ways that you and I must embrace and practice in our personal lives, in our parenting, and in our youth ministering: “The first step is to recognize the fact that your moods change. Th next is to make sure that, if you have once accepted Christianity, then some of its main doctrines shall be deliberately held before your mind for some time every day. That is why daily prayers and religious readings and churchgoing are necessary parts of the Christian life. We have to be continually reminded of what we believe. Neither this belief nor any other will automatically remain in the mind. It must be fed. And as a matter of fact, if you examined a hundred people who had lost their faith in Christianity, I wonder how many of them would turn out to have been reasoned out of it by honest argument? Do most people simply drift away?”

Lewis is right. We must deliberately and daily hold before our minds and the minds of our children the Scriptures. . . along with the creeds, confessions, and rich prayers from our history, all of which have been designed to serve as daily reminders that keep us living in truth while fleeing from error. It saddens me that many churches will go an entire year without ever putting these rich resources in the hands, eyes, mouths, and minds of their people.

Today, I am thankful for my Dad’s push on me. I’m thankful for God’s revelation of Himself in Jesus and the Scriptures. I’m thankful for those who have gone before us, leaving us with a rich history of doctrinal truths contained in creeds, confessions, and catechisms that we can use to train both ourselves and the next generation.

I pray that we would be committed to following Jesus. . . on His terms, not ours. . . and that we would trust Him rather than trusting our hearts.