Get ready for this year’s “Pepsi Halftime Show.” It’s become such a big deal that many viewers hush the room and call everyone to attention when the first two-quarters of play end and the halftime show gets ready to begin.  Could it be that the game plays second-fiddle as a kind of after-thought to all the marketing and musical entertainment?

This coming Sunday night, we’ll once again get to see what the NFL really stands for. And its our years of watching Super Bowl halftime shows with an eye to the beliefs and behaviors being promoted as “normal” that keeps drawing us back, time-and-time again, to the word integrity.  To have integrity an individual or institution will remain consistent and unchanging in one’s strong moral principles. There is a wholeness and unbrokenness between what one says and what one does, both in public and in private. When it comes to the National Football League, those of us who follow the sport can’t help but see and hear the messages the league sends regarding a host of issues including social justice, racism, domestic violence, sexual assault, drug abuse, and more. I’m wondering as I do every year: will this year’s halftime show, like all others, leave us scratching our heads as we watch, listen, and deconstruct performances that undermine the NFL’s “stance” on these larger issues?

I’ve been around long enough to have listened to loads of music from halftime performers Mary J. Blige, Eminem, Dr. Dre, Snoop Dogg, and Kendrick Lamar. Earlier today, I spent some time listening in to some of what might be included in the halftime set list. There’s a possibility the NFL’s integrity might be compromised.

Why is this is important as a cultural moment which needs to be understood. My years in youth ministry and culture-watching have, I hope, been marked by growing skills in both the exegesis and interpretation of Word and world. At least that’s what I have endeavored to move towards. And, I hope that the fruit of that journey has been an ability to develop some kind of discernment that might reflect a growing commitment on my part to things that are good, true, right and honorable. It’s a journey that I’m still on and one that I believe all followers of Christ are called to pursue. I say this purely as a precursor to sharing some thoughts sparked by my ongoing study of Word and world, and how specifically it might all play out in this year’s Super Bowl Halftime Show. 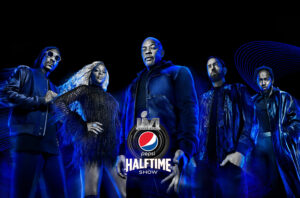 Remember that culture is both a map and a mirror. It serves both directive and reflective purposes. As a map, it tells us what to believe and how to live in the world. It’s an especially effective map when its pop culture forms are consumed by children and teens. . . who are in developmentally formative years which make them deeply vulnerable to blindly following the maps with dedication and without question. What we will watch this Sunday night at halftime is not at all benign. It serves as a signpost pointing in a certain direction. As a mirror, it reflects back to us our collective cultural heart. . . at least what the entertainment moguls desire and expect our collective heart to be. If we’re not all there yet, we at least know that our cultural leash is pulling us in that direction. As William Romanowski has written, “Culture refers to the way that we define and live in God’s world. It is a collection of ideals and beliefs, values and assumptions, that makes up a kind of master plan for living an interpreting life.” This Sunday night, that “master plan” will play out on the halftime stage.

Rather than using this space to jump into a complete overview of the lives, careers, and worldview messages communicated through the entertainment brands millions will be watching on Sunday night, here are some thoughts prompted by this upcoming cultural moment. . .

First, let’s never diminish or deny the reality of talent and where it ultimately comes from. You will see some great talent on display during halftime. There will be singer and dancers who have been given the ability to sing and move. . . things that I’m totally void of myself! The list of talented people who will put together the Super Bowl game and broadcast is long. . . coaches, producers, owners, administrators, graphic artists, videographers, marketers, etc. . . . all of them incredibly gifted and talented. And lest we forget, when all of them develop and pursue their talent, they are imaging the God who made them by exercising their creativity. The result might not be God-glorifying, but the talent in and of itself always is. Which leads to the next thought. . .

Second, let’s never forget that talent always moves in a direction of glory and praise. Our creativity. . . whether in work, play, academics, or the arts. . . always points in a direction of glory and praise. When talent moves in a direction that promotes the beauty of human flourishing, it gives honor and glory to God. It serves as a signpost where human eyes are not invited to stop and stare, but where human eyes and the hearts they lead to look beyond the creation to the Creator. But when it invites us to settle on the things of the world, the flesh, and the devil. . . then talent leads to the spread of cultural beliefs and behaviors that undermine our human flourishing and are ultimately idolatrous. 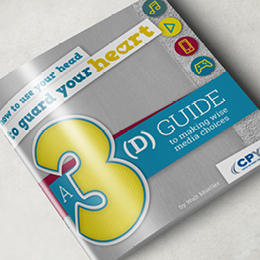 Third, we must endeavor to teach our kids how to discern media’s messages and maps. Here at CPYU, we’ve been relentless in our three-decade pursuit to help youth workers, parents, and kids alike learn how to process media critically and Christianly. Our popular tool to facilitate this is our How To Use Your Head To Guard Your Heart 3(D) Media Evaluation Guide.

So, what do we do with Sunday night’s Pepsi Super Bowl Halftime Show? I know many parents and youth workers who will be shutting it down in favor of derailing its influence while offering something else as an alternative. That’s a good move, for sure. Countless others will be watching along with the kids. Knowing kids, I’m guessing that many who won’t be watching on Sunday night will be watching the replay on their smartphones not long after. FOMO realized has a way of doing that. Its for this reason that regardless of whether or not you and the kids you know and love will be watching, skills in thinking critically and Christianly about media need to be taught, practiced, and instilled in our kids so that they might engage both now and in the future with media in ways that yield conclusions and decisions which bring glory to God. And when that happens, we are leading them one step closer to a life of integrity.