We’ve watched lots of sports in our house. Chances are, your family has done the same. And like you (most likely), we’ll be watching along in two days as the Bengals meet the Rams in Super Bowl LVI.

As we always do, we’ve been getting ready for the big game here at CPYU. Why? It’s a huge cultural moment. . . particularly when it comes to the commercials and the halftime show. Earlier this week we released our annual Super Bowl Commercial Ad Filtering Questions (a fun educational/discipleship exercise for kids) and some thoughts on what we might see during the halftime show. 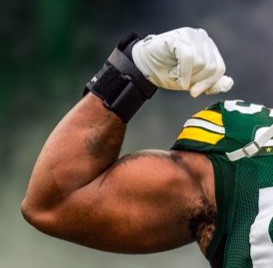 But there’s a very significant something else we should be looking for and leveraging. It’s the on-field behavior of the players. It’s certainly a big game, a big stage, and a big deal that’s worth celebrating. . . both getting there and for the team that has the most points once time runs out. We can’t blame the guys for getting fired up. We should expect nothing less. But are there ever times when players cross the line from performing with excellence and humility, to a kind of arrogance that not only reveals over-the-top pride, but also teaches our vulnerable kids to do the same? Sure, we can write it all off as “part of the game.” But is that justification for unbounded vanity?

About ten years ago, Drake Oz penned an online piece about the 25 Cockiest Players in the NFL . In it he writes, “Cockiness is defined by Dictionary.com as ‘arrogant; pertly self-assertive; conceited.’ But when it come to the NFL, cockiness is taken in a number of different ways: as swagger, confidence, or flat-out stupidity. No matter which way you look at it, you know it when you see it.” A decade has passed since then, and we have to ask ourselves, “Do we know it when we see it?” Perhaps it’s become so common that we see it as ordinary. When this happens, familiarity somehow sands away at the edges of our better judgement and we wind up celebrating as virtuous that which we once believed was a vice. That transition takes place everywhere and we typically don’t recognize its happening. Have you watched the way NFL arrogance is mimicked all the way down to the lowest level of youth football?

I’ve been watching the NFL, College, and High School Football for over 50 years. I have a long-view advantage those of you who are younger don’t. There once was a day when the players would get deservedly excited about a big play, a fourth-down stop, a pretty catch, a sack, or a touchdown scored. But they handled it all differently. There was never the “Hey, look at me!!” self-absorbed and self-promoting bravado that we see today. In a way, players quietly did their job. . . going about their business without having to draw attention to themselves beyond the attention they would receive for simply going about their business with excellence. In other words, they let the quality of their work do their talking without having to tell us about the quality of their work. If you don’t believe me, watch the videos of guys scoring touchdowns back in the day. You cross the goal line, give the ball to the ref, and get on with your business. Check out this one from the first touchdown ever scored by the Dallas Cowboys. . .

As Christians, we need to be about the task of integrating our faith into all of life. . . including our play. Consider the Scripture’s consistent and strong message on pride, arrogance, and humility. Here’s just a few. . .

Perhaps this Sunday night you can leverage your viewing experience in ways that advance their knowledge of God’s will and way, while exposing the dark side of the kingdoms of the world, the flesh, and the devil. Praise and celebrate on-field excellence. But call out behavior that’s purely unsportsmanlike, arrogant, and even evil. . . even if we are told that “Hey. . . it’s just part of the game!”

In our house, we leveraged these moments with our kids. I remember processing these moments with my oldest son when we would watch a game. My running commentary would include things like, “Don’t eve do that!” , “If you are ever given the opportunity to make a big play or score a touchdown, act like you’ve been there before”, and “Let your work speak for itself.” I’m sure he thought I talked too much, but it did sink in.

As you get ready for Sunday’s game, take a minute to listen in to today’s 1-minute Youth Culture Today podcast which is about a new word just added to the dictionary – “flex” – occasioned by our love for bragging and boasting: