This morning, I was sitting and looking at the pictures here in my basement hideout. Pictures of my kids. . . now all grown. I started rifling through some photos of them all on my computer, including shots of all of them at various ages on a variety of athletic fields. I also looked at the picture of my Dad as a teen perched and smiling on the medal stand at Philly’s Franklin Field as he received his award at the Junior Olympics back sometime around 1948. This little trip down memory lane took me back to something I wrote about kids, parents, and sports 14 years ago this week as I reflected on a conversation I had 14 years ago today. Thanks to my nostalgia and the fact that our kids’ spring sports season is gearing up once again, I revisit it here. . .

March 17, 2008 – Last Saturday – as I’ve done on numerous spring Saturdays for the last nine years – I attended one of my son’s lacrosse games. This year it’s somewhat bitter sweet as we’re counting down the number of games left in his career. He’s a college senior. Once that final whistle blows sometime in May, it’s over. It’s been fun to watch. Not only is his organized lacrosse career over, but practices and games too numerous to count from a variety of other organized sports. . . . well, that’s all coming to an end as well. He started all this stuff when he was five-years-old with that incredibly boring and slow-moving phenomenon known as “T-Ball.” It is, however, anything but boring and slow-moving when you’re chuckling at your own kids out there on the field. 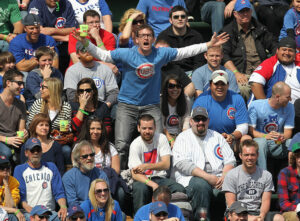 Last Saturday’s game afforded a great opportunity to sit on the sidelines and catch some perspective. I’m not sure I would have gone too deep in my thoughts had it not been for the pleasant surprise of seeing my old friend Ron in the stands. I’ve known Ron for over 25 years. Even though we live fairly close to each other, I haven’t seen him for a few years. Ron was at the game to see his nephew play for the opposing team. Ron’s played and watched his fair share of games over the years. I remember watching Ron play football on TV when we were both in college. I didn’t know him personally at the time. He was busy playing linebacker for Joe Paterno. Not surprising. He grew up on a farm in a family of seven kids. All were stellar multi-sport athletes. It could have been something in the water those kids drank on the farm. Most went on to be scholarship athletes in college. One of Ron’s brothers quarterbacked his NFL team to a Super Bowl championship.

Ron and his siblings all married athletes. Like some sort of Russian Cold-War era athlete factory, all of the couples have given birth to kids who all happen to be, you guessed it, athletes. In fact, the next generation of Ron’s family is so incredibly talented, that Sports Illustrated ran a story on them last year. I think all of them have gone on – like their parents – to be college athletes. Sometimes it seems like life isn’t fair doesn’t it? . . . All I want to do is be able to dunk a basketball. . . just once. Never gonna happen though. It’s not in the genes. I’ll bet Ron’s mother was able to dunk a few in her time. Not fair.

So Ron and I are catching up on life in the stands. We talk about our wives, our kids, and what’s been going on in our lives since the last time we saw each other. Then, we talk about how God has graciously – through both His Word and the circumstances of life – taught us lessons about what really matters. Knowing how easy it is to lose perspective and to make the mistake of seeking identity in our own play or the play of our kids, our conversation turns to processing what’s happening on the field through the eyes of God’s Word. We talk about how athletics are a great and wonderful gift as we sit and watch a group of guys run up and down the field giving glory to their Creator as they play. Some of the players are out there doing it intentionally. Others don’t give a thought to their Creator. . . but their athleticism, agility, and joy all point back to the One who made them. . . even if they have no clue.

As I climb down out of the bleachers and walk away from my conversation with Ron, I rehash our exchange and the perspective it brought. Our identity can only be found in Christ alone. Not in our talents or play, or in the talents or play of others. We should enjoy those things, but only as we ultimately find our identity in Christ. Anything else is idolatry. I realize as I watch my 21-year-old son out there that life is like the grass of the field. It pops up and goes by so incredibly fast. Just yesterday he was struggling to hit that ball off a tee. Where did the time go? And, I realize that when all is said and done, it’s not the score or accolades that matter. Rather, it’s what you’ve allowed God to teach you through your experiences and circumstances, the highs and the lows – both on and off the field – that’s most important. And, that the “whatever” it is that you do is given to God as an offering of praise. I love how Eugene Peterson translates it in The Message: “So here’s what I want you to do, God helping you: Take your everyday, ordinary life – your sleeping, eating, going-to-work, and walking-around life – and place it before God as an offering” (Romans 12:1).

One other thought. . . . when it comes to church-league sports, why do we find this so hard to remember?