Were you watching the game last night? I was. And as the game began I couldn’t help but wonder how a player who had shown alarming symptoms of a neurological on-field injury just four days before – a highly-publicized and re-run over-and-over injury I might add – would even be suited up for last night’s game. But there he was. And not long into the game a bruising tackle brought his head down hard to the turf. . . and the close-up of his contorted and frozen hand as he lay motionless on the ground served as a reminder of the reality and extent of the damage a concussive blow can have. 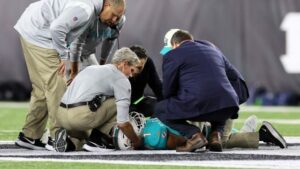 I love football and I love watching football. . . perhaps too much. I was asking myself if that was the case as I watched the replay of Tua Tagovailoa’s injury last night, as well as the sobering scenes of his removal from the field on a stretcher. Like you, I was relieved to hear the reports later in the game, telling us that he was, in fact, moving all his extremities.

That young man should never have been allowed on the field last night. And while it sounds a bit extreme, I’m increasingly of the strong opinion that with the growing body of knowledge regarding kids, tackle football,  concussions, and the long-term consequences of blows to the brain – most of which go unnoticed – we need to think twice about allowing our kids to play tackle football before eighth grade. And even then, the risks are multitude. I wonder sometimes if it’s our parental desire to find satisfaction through watching our kids play out on the field that keeps us from leaning into our better judgement and holding them out in an effort to parent them into a safer childhood and healthier adulthood.

At CPYU, our desire to facilitate the stewardship of our kids’ spiritual, emotional, relational, and physical health has led us to sit up and take notice of the good work that’s being done at the Concussion Legacy Foundation. It seems that each and every week, their good work is yielding more and more helpful evidence that parents and coaches should be heeding so that our parenting and coaching decisions now might result in the long-term health and flourishing of our kids.

There’s a host of helpful resources on the CLF website. I read these words on their site this morning:

There are about 3 million TBI-related emergency department (ED) visits, hospitalizations, and deaths in the United States each year. The leading cause of all TBI-related ED visits is falls, which accounts for 48% of visits. The second-leading cause, with 17%, is being struck by or against an object. Injuries from a variety of sources – including accidents, abuse, blast exposure and many more – can cause concussion.

One of the leading causes of concussion, of course, is sports. The CDC estimates as many as 3.8 million concussions occur in the U.S. annually through sports and recreational activities. However, only a fraction of sports concussions are recognized by athletes, coaches, and parents, and treated by medical professionals.

If you’ve got children who are playing or considering playing a youth sport that includes risks of concussions, don’t look away from the horrifying scenes we saw last night. That was reality. Take some time to think about your God-given responsibility to steward the health of your kids. Think about how that desire should over-rule that deep desire we have to put our kids onto some of the riskiest fields of play. . . sometimes as a result of our own idolatrous parental impulses. Go to the website of the Concussion Legacy Foundation. Read the research. Learn about the horrors of Chronic Traumatic Encephalopathy. Watch the PSA from the CLF that I’ve embedded below, and listen to the episode of our Youth Culture Matters podcast we put out on this very issue (embedded below).

Of course, all of us hope Tua Tagovailoa will fully recover. He’s truly fun to watch on the field and an up-standing guy. But we can’t sweep lessons learned under the rug.