A news story this week caught my eye and jogged my memory. The story was about a new trend that has parents and health officials concerned. It seems that a growing number of children and tweens are “smoking,” of all things, Smarties. Not only that, but they’re posting their Smartie-smoking videos on YouTube. They crush them up in the cellophane roll, open both ends, inhale the crushed sugar into their mouths, and then blow out sugary Smartie smoke.

All this talk about Smartie-smoking took me back to my childhood fascination with smoking. You need to know that I grew up in a home where nobody smoked. No cigarettes, no cigars, no pipes. Nothing. However, I grew up in a neighborhood where plenty of my friends’ parents smoked, and they smoked all of those things.

Lucky me. I had a bit of a childhood fascination with the smell of cigarette smoke. Yep, I was one of those weird kids who liked the smell. . . sort of like the smells I liked when we pulled into the gas station and my dad would roll down his window to tell the attendant to “fill ‘er up with regular.” Come on. . . I know I’m not alone in this. I also remember the smell of cigars. . . mostly the smell of collective cigars as that smoke mixed with the odor of watered down beer in the stands at Connie Mack Stadium. I still think about baseball when I smell a cigar. And then there were the pipes. I had a few friends whose dads had pipestands on tables next to their favorite chair. They also had those ashtrays that sat on floor pedastals next to their chairs. I remember sticking my nose into those pipe’s bowls to grab a sniff of scented tobacco. I also remember a couple of neighbhorhood dads who would walk behind the lawn-mower with a pipe clenched between their teeth. It looked kind of like a steam-engine puffing through the backyard.

Not only did we have real-life flesh-and-blood examples showing us how to smoke everywhere we turned, but the world of marketing did a good number on us. Back then we didn’t know as much about the dangers of cigarettes. Smoking was presented to those of us who were Christian kids as a moral risk (yes, there will be lots of smoking in Hell! Can you say “sin sticks?”), not the health risk we know it as today. On the other hand, smoking was presented by marketers as manly, adult, and even the sexy thing to do. Liberated women smoked and they even had their own brand. . . Virginia Slims. Marketers knew back then that to grow the cigarette business, they had to cultivate new smokers. Even the Flintstones – a cartoon I loved and watched faithfully – marketed cigarettes to kids like me. More recently, there was Joe Camel. I’ve heard lots of statistics over the years regarding kids and smoking. The tobacco companies know that 80% of adult smokers started before they were 18. And, the tobacco companies know that they have to develop thousands of new smokers a day to replace those who either die off or quit. So, it makes sense to go after impressionable young kids.

Like all other kids, I wanted to appear grown up. In today’s world, marketers call that age-aspiration, and they’re experts at exploiting that desire in order to get kids to adopt values, attitudes, and behaviors that result in spending money on things. . . . including cigarettes.

Okay. . . so we never smoked Smarties. But we didn’t have to. The world of candy-makers and toy-manufacturers set us up with far superior stuff. There were those thin candy cigarettes that came in those look-alike boxes. 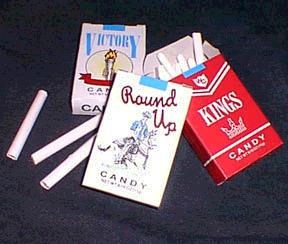 They were white sticks of sugar with a little red tip. Be careful! . . . and be sure to eat from the “unlit” end first. There were also bubblegum cigarettes. These were cylinders of the cheapest bubblegum known to humankind (think about three steps below baseball card bubblegum) wrapped in paper. A thin layer of powdered sugar on the gum allowed us to blow smoke out the other end of the cylinder. There were also the fake cigarettes that we could buy in packs that had no candy content. These weren’t for eating or chewing. They were solely for “smoking.” Made of paper, the “lit” end featured a piece of crinkled gold foil that protruded out, making it look like it was glowing with heat. Inside the paper cylinder was chalk that you would blow out past the foil. How did I know it was chalk? I inhaled a couple of times by accident. Oops. We also had those great bubblegum cigars. The label said “El Bubble.” Yes, cubans! 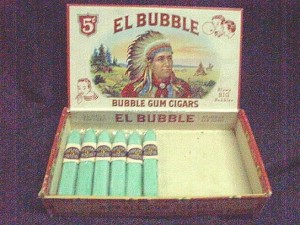 Why was there a Native American (or “Indian” as we called them back then) chief featured on the box??? And then there were the licorice pipes that we could eat, and the bubble-pipes that we could “smoke,” or more accurately, “bubble.”

So there I was. . . a conflicted young man. On the one hand, smoking was wrong. On the other hand, I was battling that universal childhood recipe that included one part curiosity, one part impulsivity, and two parts wanting to look grown-up. Marketing, adult examples, a load of tasty sweet tobacco treats, and my youthful impulsivity combined in a dangerous mix. . . . that of course, led to my first cigarette.

It’s one of my most vivid childhood memories. It was early in the summer. I was playing at my friend Lisa’s house. Her mom was a smoker. She kept cartons of Salem menthols in the end kitchen cabinet, right above the phone. She also conveniently stored loads of matchbooks in the same place. Her mom was out of the kitchen and we saw our opportunity. Too short to reach the cabinet, I pushed the kitchen chair over against the counter-top. Lisa climbed up, opened the cabinet, and grabbed a pack of cigarettes along with a couple books of matches. I can still see it. . . and feel it. Guilt has a way of serving to set the cement of your childhood memories.

We quickly snuck out of the house and through the narrow woods to the neighbor’s property. It was a large piece of land with an old spring house sitting off to the side. It was a great place to hide. So there, hunkered down behind the spring house, we attempted to share our first cigarette. I say attempted because we encountered some fundamental problems. We had played with enough matches in our devious and sneaky young lives to have no problem getting the matches lit. The cigarettes were another story. I remember I would light a match for Lisa and she would do the same for me. Holding the matches in front of each other’s Salem menthol, we would try to get them lit. We went through our two books of matches before we had to quit. The problem? We were too young and stupid to know that you were supposed to inhale and not blow out while lighting a cigarette! Consequently, our feeble attempts ended with us blowing out all of our matches. Today, there’s a part of me that thanks God for the conditioning I got with those blow-through bubblegum cigarettes.

By the way – and this is absolutely 100% true – did I mention how old I was when this all happened? It was 1962. The summer of my sixth birthday. The summer between first and second grade. Yes. . . modeling, marketing, and the tendency to mimic those who are older is a volatile mix in our kids. Always was. Still is. I’m afraid the Smartie-smoking thing might figure into the mix for kids today.

Oh, I tried smoking later in life. I figured out how to light them up – cigarettes, cigars, and pipes. I even once tried a wad of Red Man. It wasn’t pretty. Fortunately it was all just passing curiosity and none of it ever stuck. It was mostly a once-and-done thing and I never got hooked. But there were many lessons learned.