Do you know this 8-year-old kid? His smiling face graces the wall at our CPYU office as a reminder of why we do what we do. The photo was taken at a time when – as his mother says – the little guy was a happy-go-lucky kid who didn’t seem to have a care in the world. In fact, his parents described him as the type of kid who would run into the room to entertain and visit with family friends and guests. Then, something happened.

Shortly after the photo was taken, the little boy’s family fell apart as his mom and dad divorced and went their separate ways. People who knew him said the smiling 8-year-old grew up not smiling much anymore. His broken world crept right into him, leaving him broken as well.

We have two more pictures of that smiling little boy hanging on the wall at our office. One sits on either side of his 8-year-old face. In those pictures, he isn’t smiling at all. The pictures I’m talking about appeared during the same week on the covers of music magazines Rolling Stone and Spin. Ironically, the covers were almost identical. Even more ironic is the fact that they arrived in my mailbox on the same day. I remember pulling them out of the mailbox, staring at them with a hurting heart as I walked them into the house, and then putting them down on the kitchen table and showing them to my wife, Lisa. We talked about the sad fact that these photos appeared because of his death by suicide at the age of 27, a death that shook up the world because the young man was at the height of musical success. I remember Lisa commenting on the emptiness that can be seen in his eyes. That’s the emptiness that comes when your world has fallen apart and things are not the way they are supposed to be. 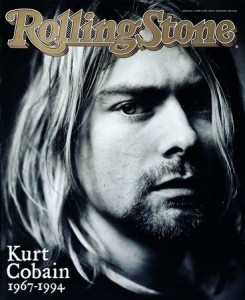 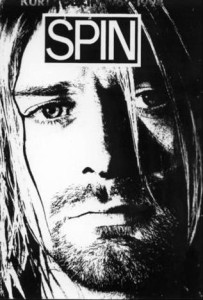 This Sunday – April 5 – marks the 15th anniversary of Kurt Cobain’s self-inflicted death. For most of us, the day will pass by without any thought or care about what happened to this young man a decade and-a-half ago. After all, we lived through it. But it’s important to remember Cobain for the simple reason that his face – before and after – is the face of far too many kids whose story is far too much like his.

I’ll never forget the first time I heard about Nirvana. I was on a middle-school youth retreat with a bunch of kids I didn’t know. One of the boys was alone in the cabin playing music I had never heard before. When I asked about it, he told me the story of the band, the lead singer, and their music. His favorite song off the Nevermind album was “Smells Like Teen Spirit.” When I asked him what he liked about the music he looked at me and said, “This guy’s singing what I feel.” Enough said. That’s why Cobain’s pictures hang on our wall here at CPYU. They serve me as reminders of why we do what we do.

I paid a little extra attention this morning to those three pictures that hang on our wall here at CPYU. I would encourage you to do the same. And, I encourage you to take a little time to look and listen to Cobain singing that song that spoke to and for my young friend. . . and still speaks for many kids today.