One thing I’ve always loved about the Old Testament are the passages of remembrance. These are the times when the leaders of Israel would call all the people around to remind them of what God had done in their midst. Then, they’d look to the future, issuing calls to obedience in response to God’s great faithfulness.

I had one of those moments this past weekend. We returned to the Philly area where I grew up. The occasion was a 50th anniversary celebration for a very special church. Supplee Presbyterian Church in Maple Glen, PA holds a very special place in my heart and in my life. During the summer of 1970, my family moved to Maple Glen. I was getting ready to start high school. My pastor father had been called as the pastor of this church. Little did I know how my experience in this congregation would shape my life.

From 1970 until 1974 I was nurtured by the combination of a Christian home, a wonderful church family, and an incredible youth group experience. During those four years a trio of young seminary students named Phil Douglass, Mike Barbera, and Chuck Wiggins served one after the other as our youth pastors. They taught me and my youth group peers about what it means to know, love, and serve Jesus. The made such an impression on my life that I knew upon high school graduation that I wanted to “grow up” and do something with kids. . . . just like them.

During last weekend’s time of remembrance, I realized more powerfully than ever before that it wasn’t just my parents and youth workers who had influenced my life in a Kingdom-direction. As I looked around at the faces over the course of the last weekend, I saw many old faces and remembered others long-gone who poured their life into mine in one way or another during those four very formative years. It hit me especially hard yesterday when I was priviliged to stand in front of the 50th anniversary gathering to make some remarks. At one point, the emotion was overwhelming, and I knew that if I had continued by naming names and talking specifics I would a) meltdown, and b) keep people there for a long, long time. I realized more deeply than ever before that God had given me the gift of being surrounded and influenced by diverse members of His body.

Supplee Presbyterian Church continued to shape me long after I went off to college. I had intended to say this yesterday, but forget: what gave me the most excitment about coming home from college was a chance to be at that church and with the people in that congregation. In hindsight, it served this purpose for me because it was a place of truth, encouragement, nurture, and support.

When I graduated from college and went off to do youth ministry and then on to seminary, Supplee was right there with me, offering loads and loads of financial and prayer support. I trust that I represented them well. 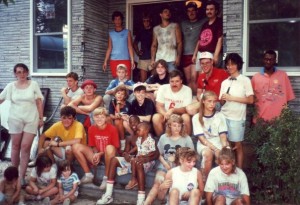 On Saturday of this weekend’s anniversary festivities, I attended a youth group reunion. It wasn’t a reunion of kids from my high school days. Instead, it was a gathering of kids (and now their kids!) who had been a part of the youth group when I returned to serve as Supplee’s youth pastor from 1985 to 1990. They were, by the way, the greatest group of kids a youth pastor could ever had hoped for. What a privilege it was to have those few years at the church of my childhood. I can only hope that my time there was used by God to build His Kingdom. I can certainly say that my time there with my own growing family was used by God to build His Kingdom in our lives. On Saturday, almost 20 years later, that reality hit home in some big ways as I looked around at the young faces gathered under that picnic pavilion. I was blessed to be able to be surrounded by such a great staff, a great group of youth ministry volunteers, phenomenal parents, and some very incredible kids. My wife and kids were blessed to be able to come along for the ride.

So, now I remember. What a blessing. And, I trust that my memories of God’s great faithfulness will serve to fuel my desire and ability to trust in him more deeply now and for the rest of my life.

To those of you who are parents and youth workers. . . be sure to give your kids the same opportunities to be surrounded that I had. Too many of our churches are separating the generations from each other in worship, education, and service. When that happens, nobody wins. I was surrounded. . . and it was a great thing. I trust that this weekend of remembrance will be used by God to shape the rest of my life.