It was the year before I was married and I was living in a rental home with three other single guys. We were existing in a state of forced thriftiness as none of us had much money. A couple of us were doing campus ministry. One was a student. The other was just looking for the best way to save money. The house was nice. It even had a detached two car garage. . . which came in handy. . . or so we thought. 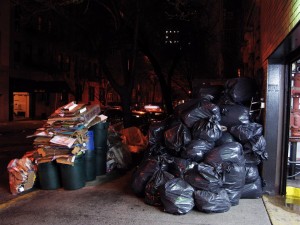 We were cheap. Since garbage collection cost money, we put it off and put it off. We figured that between the four of us, someone would know somebody who would be willing to combine our garbage with theirs once a week. But we never got around to it. Instead, we kept filling the large plastic bags and stacking them in the garage. Not only were we stockpiling our own trash, but the constant flow of visitors and pizza parties most likely multiplied our stuff x 2. When moving day arrived and we were all parting ways, we had to face reality. We had literally filled one side of that garage with what had become several truck loads of bagged rotting and stinking garbage. Suddenly, there was no looking the other way. We had to deal with it. The pile was imposing and after loading all our stuff into separate trucks, nobody had the time, energy, or ambition to undo something that was going to make the landlord flip.

I thought about this earlier this week when I read the new story about the father and son from Mastic Beach, NY who found themselves facing $20,000 in fees and fines after authorities removed about 42 tons of trash from their property. As I was reading the story I shook my head in disbelief, wondering how a couple of guys could be so stupid. Then I remembered that I knew exactly how a few guys could be so ignorant.

Not only was I part of a similar instance of ignorance, denial, and foolishness myself almost thirty years ago, but I realized I’ve been pulling the same stunt ever since. Filthy smelly sin gets pushed aside, hidden, and ignored. “Some day,” I say to myself, “I’ll get around to dealing with it.” But someday never comes.

The same newspaper ran a front page story about a former school secretary who worked at a local Catholic school. A 47-year-old woman, she stole more than $163,000 in tuition money from the school. She knew what she was doing. She knew it was wrong. She kept on doing it. The judge who sentenced her to 1 to 2 years in prison told her at sentencing, “You didn’t stop doing this on your own. You were caught.” She was filling her “garage” with “garbage,” and somebody came along and pulled up the door to expose her filthy little secret. Stories like that sure do make you stop and think, don’t they? They make us wonder about the secrets we harbor because we just haven’t gotten around to dealing with them. Someday never comes. . . until the someday it’s all exposed.

The Scriptures are filled with admonitions to put off our old selves and to put on Christ. The Apostle Paul tells us to “put to death, therefore, whatever belongs to your earthly nature” (Col. 3:5). What follows in the next verses is an inventory of garbage that tends to get heaped up in our garages. The great wonder of Christianity is that Christ does this for us.

For those of us Christ-followers who are older, you know what I’m talking about. We’ve all been there. . . and still live there. And, we’ve got to deal with it. We should be concerned about ourselves. But we should also be concerned about the generations that follow. I’m seeing a growing number of those who are younger who embrace the label “Christian” who don’t even bother to hide the stuff in the garage. Now remember, those who hide it are no better than those who don’t. But this changing reality is indicative of a subtle cultural shift that we must see, understand, and address. Young Christians are now sinning boldly, and they don’t seem to care. Or, many of them are proudly wearing the garbage like clothing, not even knowing that what they’re wearing stinks. And when they’re told, they still don’t care.

The answer to all this. . . for me, you, and those who are younger. . . is to be washed daily (as one of my seminary professors used to tell us) in the Word. I believe that more and more each day. In his latest book, Uncommon, Tony Dungy offers a simple bit of advice that has served to remind me of the answer to the problem. In his “Keys For Your Full Potential” Dungy says, “What is down in the well comes up in the bucket.” I think the answer lies in what for years has been called “Christian Education.” That’s what fills the well as it is pursued individually and engaged in corporately as the Body of Christ cares for its young and for each other. I don’t think it’s any coincidence at all that as Christian Education has faded as a priority, wells have been filled with nothing but fluff and garbage. Then, we see the aforementioned cultural shift picking up steam.

We’ve all got to deal with the rotting pile of stench in the garage. And, I’m hoping that we’ll help the emerging generations sharpen their declining sense of smell.