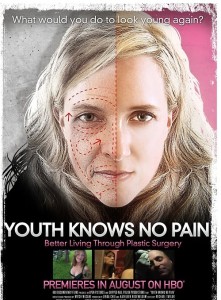 Last week I wrapped up preparation for a new seminar on Narcissism in youth culture. Not surprisingly, youth culture is really no different from our culture-at-large in terms of the obsession with me, myself, and I. During the long and involved process of doing research, I stumbled across some disturbing and amazing examples of self-love gone to extremes.

One of those discoveries was the fact that self-love gone mad is fueling our nation’s $60 billion a year – yes, $60 BILLION A YEAR! – anti-aging industry. It’s not the least bit unrealistic to assume that as this issue snowballs, that number’s going to be getting larger, larger, and even larger. And it’s not just adults. Appearance obsession and a run on cosmetic surgery is more and more common among teenagers and even children. Sometimes it’s pushed by parents. Did you know that non-medical cosmetic surgery procedures among children and teens have increased five times during the last 10 years?!? There are even girls who now ask for new breasts for high school graduation gifts. . . . and parents who are bankrolling the procedure.

One of the most alarming pieces I ran across while doing research is Mitch McCabe’s HBO film, Youth Knows No Pain. The daughter of a plastic surgeon, McCabe takes viewers on a trip through the underbelly (no pun intended) of the anti-aging industry with some compelling and sad peeks into the lives of those who are funding it through their vanity. One of those characters is a 53-year-old Texan named Sherry. You might think Sherry is extreme with her revelation of spending $35,000 on a variety of procedures in just one year. She is. But I also think Sherry will not be alone in the very, very near future. She is the face (no pun intended again) of things to come.

Youth Knows No Pain is worth your time and attention. It’s not a fun ride, but it’s one we need to take if we want to know how to bring the light of God’s Word to bear on this new and growing obsession with self that is manifesting itself in such horrific ways. The film is currently running on HBO and can be accessed anytime by those of you who have OnDemand. Let me, however, give fair warning: at one point in the film, Sherry is so obsessed with herself and her procedures that she freely shows the cameras the results of her breast augmentation. It helps to know that what you are seeing is not real.

Sherry is not alone in Youth Knows No Pain. McCabe’s camera takes us into the lives of others who are making and spending money on this narcissistic trend. They are all worth watching.

The writer of Ecclesiastes reminds us that all of this stuff is nothing but vanity. The Scriptures are clear that nothing but a relationship with God through Jesus Christ can fill the void. The Scriptures and history are also clear that we’ll look for anything and everything to do the redemption trick. Life in our post-Genesis 3:6 world is marked by suffering, aging, and death. Nothing in this world, no cream, and no surgeon’s scalpel can stop it. . . even though we can be fooled into believing that something can. Time and gravity take a toll.

Youth workers and parents. . . start talking about this stuff with your kids now. They need to know what to do with this thread that’s woven in and through the fabric of their culture.