My buddy Andy Brazelton from Simply Youth Ministry has been in town visiting us at CPYU for the last couple of days. Since this is his first-time here in Central Pennsylvania and the Lancaster County area, he’s got lots of questions about the unique and sometimes unusual culture. It doesn’t help that Andy grew up in Southern California – a culture that’s just a little bit different from ours here.

When Andy arrived at the office yesterday we stood together in the parking lot. We talked about things like our unique local smells (could be pig farm or it could be chocolate. . . depending on which way the wind is blowing), our local food, how green it is, and the Amish. It wasn’t long before the conversation turned to our local celebrities and their now-familiar and empty house that we could see just a few hundred feet from where we were standing. Andy asked about what the madness was like in our neighborhood before Jon and Kate (I don’t even have to mention their last names anymore and you know who they are!) up and moved a year ago this weekend. Andy was surprised when I mentioned that there really was no “madness” related to gawkers and paparazzi a year ago.

Think about that for a second. The craziness, fame, spin, tabloid obsession, and personality makeovers the pair are locked in is really only a few months old! As Andy and I were talking, I realized that we are living in some pretty unique times. Theologically speaking, our fallen nature is fed and nurtured by a rapidly changing culture that not only worships celebrities, but allows and encourages anyone who so desires to pursue the creation of a personal brand and celebrity-status through the use (or more accurately “the abuse”)of developing technologies. Don’t believe it? Just consider exhibit A: the family of “Balloon Boy,” who by the way, live in Andy’s SoCal neighborhood!(Imagine that. . . . two guys from different sides of the country standing in a parking lot. . . talking about the famous people they live near. That’s how common achieving fame is now). 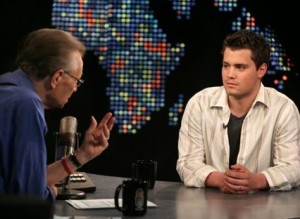 All of this got me thinking about our current publicity-seeking self-made opportunity-grabbing celebrity-aspiring culture that’s growing like a cancer and effecting our kids. It also got me thinking about the young celebrity dujour who’s all over the news and most likely will be for a least a few weeks during his fifteen-plus minutes of fame. His name is Levi Johnston. He’s a nineteen-year-old teenager we first met during the summer of 2008. He was thrown into the spotlight because he was the boyfriend of Sarah Palin’s daughter Bristol. Soon after the unknown Palin was thrust into the spotlight, it was announced that Bristol was pregnant to Johnston.

Think about what’s happened in the 14 short months since. There’s a baby and Levi is out of the Palin family picture. But that doesn’t mean he isn’t in pictures. All this week the media’s been pumping out info on Johnston’s photo spread in the upcoming January edition of Playgirl magazine. What it appears Johnston is pursuing more than anything else is celebrity, fame, and fortune. Sadly, a host of people will buy into it and fall “in love” with Levi.

It will be interesting and sad to see how this already-sad story continues to play out. It offers what I think is a clear peek into where youth culture is and where it’s headed. It tells us about what our culture and our kids value in life. It tells us just what “image” our kids desire to be conformed to. It also tells us just how difficult it’s getting to lead kids to an understanding of the image to which they should aspire to conformity. Those of us who love and minister to kids long for them to go in one direction, while almost everything else in life pushes them 180 degrees in the opposite direction. What was once seen as vice is now pursued and embraced as virtue. I think if we were given the opportunity to stand outside of our culture and see it for what it really is, we’d see just how pathetic we’ve become.

The NIV translation of the Bible tells us in Acts 17 that when Paul walked into Athens and laid eyes on the landscape covered with idols, he was “greatly distressed.” I’m afraid that our kids are living in the midst of stuff that leaves them “greatly impressed.” Let’s hope and pray that even though we live in the same landscape, we won’t lose our ability to see things for what they really are. We have to. . . . for the sake of our kids. Like Paul, our distress should motivate us to serve as signposts pointing to the cross. . . the only source of transformed hearts and lives.