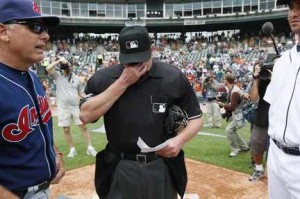 I wasn’t going to blog on last Wednesday’s baseball game – the game that’s sure to be one of the most memorable in baseball history – until hearing and seeing what I saw and heard on Saturday.

Nate’s high school lacrosse team had one last post-season hurrah with a trip north for a six-game tournament. The eight high school teams in attendance worked through their brackets on a couple of fields that sat directly next to each other. As a spectator, I sat in my trusty lawn chair between the two fields – facing one and with my back to the other. Early in the day, I heard some pretty spicy yelling from a voice from behind that became very familiar throughout the course of the day. The voice was that of one of the coaches. Initially, his berating comments directed towards his players and the refs made my head turn. I wanted to see what I was hearing. Eventually, the voice became so familiar that all I did was listen to the annoyance. At one point, I found myself wondering, “What is it like to play for a guy who does nothing but pound you?” I also wondered, “What makes someone like that?” That’s not the way its supposed to be.

It wasn’t long before “Old Yeller” was drawing the attention of a growing number of other parents. His lack of a positive attitude or any kind of good sportsmanship naturally led to conversations amongst ourselves about Armando Galarraga, Miguel Cabrera, Jason Donald, Jim Leyland, umpire Jim Joyce, fans of the Detroit Tigers, and sports fans all over North America. Those folks were brought together last Wednesday night and in the days since by Galarraga’s near-perfect pitching performance, Jim Joyce’s blown call and quick admission of such, and a whole lot of grace shown to Joyce in a day and age where events like Wednesday’s usually elicit anything but grace.

In the many interviews I’ve heard with Jim Joyce over the course of the last several days, I am blown away by the redemptive power of grace. I’ve read books by and about umpires. I’ve watched interviews with umpires. None of them want their careers to be defined by that one glaring blown call. Jim Joyce’s career will most likely be remembered because of a “safe” call on what should have been the 27th consecutive out. But it will also be remembered for someting great and amazing – the grace that turned the whole thing around. In several of Joyce’s intervies he’s mentioned how what was the lowest of low moments quickly turned to the highest of highs. . . . all because of grace.

The story not only provides great talking points and examples of the highest standards of sportsmanship, but it serves to remind us of what once was along with the great expectation of what some day will be again. The story of the blown call has become one of “shalom”. . . that universal flourishing of all that God originally made that has since come undone. Still, we catch glimpses of the Garden through stuff like this. “Oh what a foretaste of glory divine” we might be able to sing about this moment.

In a world where sport all too often becomes a magnifier of our human depravity, something else took place last Wednesday night. And it was good! Wouldn’t it be great if all of our play was marked by that kind of stuff?