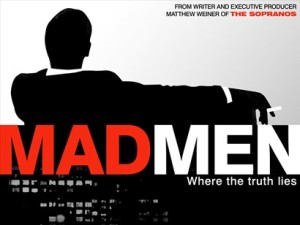 A few weeks ago I blogged about the critically-acclaimed AMC series Mad Men, the show a young friend turned me onto last summer when he asked if I was a fan. I had heard of it but hadn’t seen it. He was hooked not only by the writing, but by the show’s depiction of the era of the early 1960’s, something he knew I’d like based on my age and vocation.

I filed it away in my mental Queue and Lisa and I finally got around to watching Season 1 several weeks ago courtesy of Netflix. Last night we watched the last four episodes of Season 3 and we’re finally caught up. We’ve watched all 39 episodes of the series and we’re ready for the July 25th premiere of season 4.

I noticed that tonight at 8pm Eastern Time, AMC will be starting the first of three weekly Mad Men marathons that will catch you up through the first three seasons. If you haven’t watched Mad Men, I would urge you to give it a look. This isn’t mindless entertainment. Rather, Christ-followers who watch from the life-foundation of a Biblical perspective will gain some amazing insights into God’s world, what we’ve done with it, and what we’re doing to ourselves.

While there’s far too much to mention here, here are a few of the realities of life that Mad Men has helped me to better understand.

First, there’s the culture of the time. I’m fascinated by the fact that the show depicts the world of my childhood, a world that I remember very, very well. In fact, it does it so well and with such precisions that viewers who grew up in that world might miss some of the many cultural references and depictions. I realized while watching last night that the Draper kids – Bobby and Sally – are about the age I was back in those “olden” days. It hit me hard as they were riveted to the old black and white TV as they watched coverage of JFK’s assassination. I was in second grade at the time. I did the same thing and the memory is clear and fresh. I’m not sure I can remember a show that does such an excellent job of not only using the set to accurately reflect the times, but to do the same with values, attitudes, and behaviors. Yep, people really did smoke and drink that much back then. . . . even when they were pregnant.

Second, the show reminds us of just how fast time flies and how equally fast culture changes. It really wasn’t that long ago. Sure, it’s been almost fifty years. But I’m constantly reminding my young friends that’s it will only take a fraction of that time for the stuff that currently fills the “sets” of their lives to be passe.

Which leads to number three. . . the insights the show offers into the evolution and spread of marketing as we know it today. When it comes to marketing, the show serves as a history lesson, offering insights into not only where marketing has come from, but how it operates in our lives. For example, built in obsolescence. . . the cycle of which has snowballed from then until now. Here today and gone tomorrow used to be here this year and gone next.

Fourth, there are the insights into parenting, brokenness, and family dysfunction. The constant flashbacks to Don Draper’s childhood may bring tears to your eyes, especially if you are reminded about any not-so-easy events from your own early years.

And finally, if you’ve ever heard me talk about youth culture and marketing, you know that Madison Avenue exploits kids’ self-perceived shortcomings, anxieties, and aspirations to get them to buy products. Ultimately, it’s about promising salvation and redemption. It works. Why do you think our kids are so wrapped in materialism, narcissism, and consumption? Like all fallen humanity, they are empty. . . crying and screaming out for redemption. And that’s what I like so much about Mad Men. As I’ve said before, the philandering depicted isn’t gratuitous. Rather, it effectively shows a group of people who make big money peddling redemption, but never being able to find it themselves. These people are broken, messed-up, sorry characters who continue to spiral down as their quest for wholeness intensifies. . . and viewers know it.

I’m hard-pressed to remember a show that’s grabbed me like this before. This is one to watch and filter through the lens of God’s amazing, life-giving truth.