My summer mini-sabbatical has afforded me some extended time for indulging one of my favorite childhood activities. I’ve been taking longer and longer bike rides on the seemingly endless bicycling options here in beautiful Lancaster County. . . a place that the Internet tells me is one of the top 10 cycling locations in the world. I’m not sure who did the research on this one or tabulated the votes, but I believe them. Thanks to the recommendations and help of my buddy Adam Lewandowski at The Bike Lane in Reston, Virginia, I’ve spent the last three years viewing the scenery from the saddle of a Trek flat-bar road bike. I highly recommend both the shop and the bike. I’ve only gone over the handlebars once in that time. The rest of the time is spent looking over those handlebars while taking in the view and seeing lots and lots of stuff, including a red fox on my ride this afternoon. Oh, did I mention he was dead on the side of the road?

Recently, I’ve taken to using my cell phone camera to catch shots of interesting things I come across on my rides. I’m hoping there’s a coffee table book in this somewhere down the road. Last week I snapped these photos of a pretty creative planter, a custom pick-up truck (putting that on here for all my friends from Mississipi, Texas, and Louisiana!), and one of the many Scripture signs which sit at the end of a few Mennonite farm lanes. This particular sign deserved to be captured because it wasn’t about eternal damnation! Most of them are. 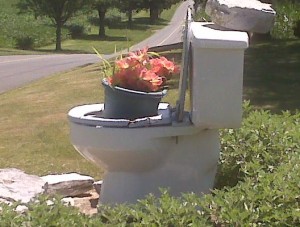 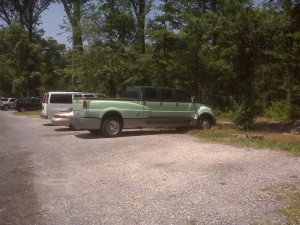 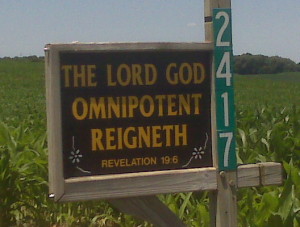 But there’s something I haven’t noticed much at all on my rides this summer. In fact, its absence is so widespread that it’s somewhat stunning. I didn’t really notice until I passed a young Mennonite mother and four of her little kids happily watering flowers together in their front yard. That’s the picture that’s been missing. . . kids outside. . . playing, working, doing anything at all. This reality struck me hard as I pedaled through Elizabethtown last Thursday afternoon. I saw backyards filled with swingsets, playhouses, etc., but no kids.

I mentioned this changing cultural reality to a couple of my friends. One of our CPYU board members, Sam Siple – the President of Eden Christian Academy in Pittsburgh – said that he’s noticed the same thing. Sam immediately went into nostalgia mode, reciting the universal summertime kid play code of our childhood which included outside play from dawn to dusk with the requisite complaining whenever one had to come home for a meal (eaten fast to get outside again), bath, or bed time. Chris Wagner – one of our CPYU staffers who is only half my age – recalls the same thing. Culture has changed and it has changed fast.

If you follow the “Youth Culture News” section on our CPYU website you may have spotted this story: “Study: Too Many Video Games May Sap Attention Span.” I’m sure (and it’s not rocket science) that the advent and rapid expansion of video-games, entertainment, and social media technologies have played a big role in keeping the kids from physical and creative play. The jury is still out on the long-term effect all of this will have on our kids, their health, their relationships (both now and in the future) and our culture, but I’m sure it’s not hard to figure out what the verdict will be.

Ok – so this post really makes me sound and feel old. But culture continues to change at breakneck speed. Our duty as people of the Kingdom is to think prophetically about these changes, and then to respond in God-glorifying and redemptive ways. And if we’re serious about responding to what we see on our ride through life, the rate of cultural change will make us sound older at younger and younger ages.