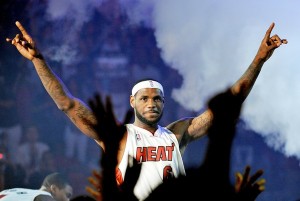 I’m not a fan of the NBA. I never really have been. Over the years, I’ve fulfilled my duty as a Philly sports fan by attending a handful of Sixers games, but it never really stuck. After last week, I’m not sure the NBA will ever catch my attention or allegiance. Following all the hype over Lebron James’ big announcement on an ESPN special, Lebron and the other two members of South Florida’s new holy trinity were introduced amidst loud music, smoke, over-the-top hype, and a heavy dose of ego to 13,000 fans who had gathered in the Heat’s home arena. They’d better deliver. Did you see it? All I could think of as I watched is that professional basketball has somehow morphed into professional wrestling.

The history of sport is not something that I’ve spent any time studying as an academic pursuit. But with 45-plus years of being a fan under my belt, there are some changes that have taken place that when seen in light of where we’ve come from, should cause concern about where we’re going. Flipping through the channels over the last 24-hours confirms it.

First, there’s the money. Did you hear that George Steinbrenner died today? Steinbrenner is perhaps the earliest and most notorious practioner of building a winning team by buying good players. He was flying solo back then. He was the only one who had the money and deisre to do so. Today, there are many following in his footsteps.

Second, there are the big egos that the big money creates and buys. The old saying, “There’s no ‘I’ in team” is just that. . . old. Athletes who live out the saying are an endangered species. Oh, there were always big egos. There’s nothing new under the sun and the human heart was just as dark back then as it is now. But there was a sense of decency and decorum that kept it all in check. But the swagger that fans once cursed is now celebrated. Just watch what happens every time Lebron James throws that powder in the air in Miami.

Third, there’s the marketing. . . which is all a part of making the big money. Last night Major League Baseball attempted to fill Angel Stadium, not for a game, but for a Home Run Derby. Hey, as a baseball fan I think it’s a great idea. But when you sit back and watch you soon realize that it’s all a marketing thing. Ironically, boredom finally got to me and I started flipping around. I ran across a replay of a 1980 Stanley Cup hockey game between the Flyers and Islanders, along with a replay of a 1987 NBA playoff game between the Sixers and some other team that I can’t remember. Do you know what struck me? As I’ve blogged before, the hockey ice was void of ads. Nothing in the ice. Nothing on the boards. But there was something else I noticed that I had never noticed before. I didn’t see any Islanders fan in the stands wearing team jerseys, t-shirts, or hats. . . and the Islanders were the home team. The fans were dressed. . . normal! I noticed the same thing in the stands at the Sixers game. But when I attended major league baseball games in two cities over the course of the last week, team merchandise (hats, shirts, jerseys) was being worn by just about everybody. . . and the lines were long at the team stores!

This is a trend to monitor and address. Idolatry takes many forms, and the world of sport offers our kids many idols. If they learn from us, they’ll most likely grow up worshipping something or someone other than the One who made them.