“Okay, our work is done here.” That’s more or less what they said, and then they packed up and left. “They” were the two traveling presenters who had come to the university where I was doing campus ministry in 1980. They worked for a large ministry organization that had developed some evangelistic multi-media presentations, one of which they had just shown to a large group of students that had come as a result of our on-campus publicity blitz.

When the mutli-media presention on the afterlife was over, an invitation to come to faith was made by the pair, and then they passed out and collected “comment cards” from all the attendees. Their job was “complete” when they had packed their van, counted up the number of “commitments on the cards,” and said “goodbye” to us.

I can still remember the dark spot where me and my ministry partner were standing on that quiet campus late at night as the van pulled away. We looked at each other, both feeling an uneasy sense that what we had just provided for students was a happening, and not something that was really going to have a lasting impact on anyone’s life. Granted, I still have no clue how God used that evening and what we did to impact His Kingdom. But from our human vantage point, something was amiss.

The way things were done that night along with seeing countless similar evangelistic methods and understandings both before and since, have combined with a growing understanding of Scripture and God’s will to affirm that our feelings of unease were justified. The world is going to Hell in a handbasket, the prevalent thinking goes. Our greatest responsibility as followers of Jesus is to “save” (and we erroneously believe that we play a bigger role in this process than we actually do, all the while diminishing God’s role) as many people as possible. Every raised hand, walk forward, or “yes” box checked on a comment card is not only a victory, but an opportunity to utter the words “Okay, our work is done here.” But the way in which we understand and live out our mission not only downplays or even dismisses discipleship and sanctification, but somehow misinforms our understanding of what it means to live as God’s people in God’s world. 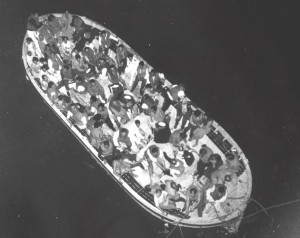 For example, this morning I read a short section in Alcorn’s book where he speaks about “Lifeboat or Ark Theology?” He cites Paul Marshall’s mention of the misguided notion among many Christians that the world is not only wrecked, but beyond salvage. Like the sinking Titanic, nothing can be done about a sinking ship. It’s time to jump overboard and sit in the lifeboat, something often referred to as “Lifeboat Theology.” You get saved, sit back, and wait. But God has not given up and God is not concerned just with the survival of His people. God doesn’t just want us to reach over the edge of our lifeboats to pluck out and “save” other victims, only to float until Heaven when all will be well. Rather, Marshall says that what we need is an “Ark Theology.” The ark wasn’t about flight. The ark was about returning to God’s earth and beginning again. After the flood dissipated, Marshall says, everyone and everything was intended to return again to restore the earth. . . . a restoration that extends to every nook and cranny of fallen creation, because every nook and cranny of fallen creation groans for restoration and redemption. . . and Jesus came to restore every nook and cranny. . . not just people.

“Fill the earth and rule it.” That was God’s command to Adam and Eve at creation. That was God’s command to Noah and his family after the flood. And that’s God’s command to us. No, our work isn’t done here. The good work of making and redeeming culture through our faithful presence in God’s world is what we need to be trumpeting through how we live our lives and what we’re teaching the kids we know and love. Not only that, it’s work that will continue once we inhabit the New Earth. And we must begin in earnest after we say “yes.”