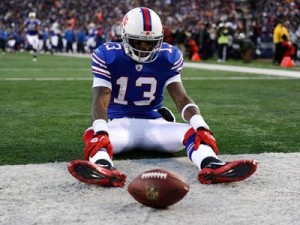 I wasn’t anywhere near the TV when Steve Johnson of the underdog Buffalo Bills dropped the game-winner in the endzone during OT of the Bills game against the Pittsburgh Steelers. About an hour into the Eagles game, the network cut in for the update and I saw the play. My “sports self” and inner fan was greatly disappointed as I root for the Eagles and for whoever is playing Dallas, the Giants, or Pittsburgh. I know. . . it’s a bad habit that needs to be broken for the simple reason that it matters not! I felt especially bad for Johnson and all the Bills fans I know. After all, they haven’t had much to cheer about lately. 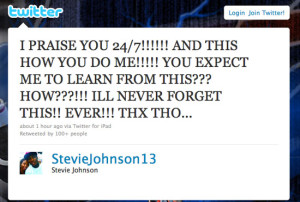 I know we need to take into account the fact that Johnson was bearing the weight of his teammates and Bills fans on his shoulders and his emotions were most likely running wild. But let’s think about what Johnson tweeted and what that tells us about our world.

First, it’s another reminder of social media gone wild. Children and teens are impulsive by nature. Their brains aren’t fully formed yet and their resulting immaturity and lack of filters means that sometimes they need others to step in and protect them from themselves. That’s why we make rules. That’s why we must constantly be talking to our kids about what they put out there for the world to see. We’re seeing more and more adults indulging impulsivity and blurting out impulsive first reactions, knee-jerk comebacks, and meaningless self-centered blabber via social media. I’m afraid we’re rapidly forgetting that there are times – times defined as “usually” or “most always” – where it’s best to just keep quiet.

Second, Johnson’s tweet serves as a reminder of something else. . . that the mouth is a window into the heart and soul. The things we say and how we say them show the world who we really are. I don’t know anything about Steve Johnson. . . nothing except that he’s really no different than any of the rest us (he accidentally dropped a pass), and that he’s blaming his dropped pass on God. Really??? To be honest, I don’t think God really cares about who wins an NFL game. What I believe he does care about is how NFL players play and to whose glory it is that they play to.

Third, Johnson offers a window into pop theology. I guess we can call it pop theology because it’s widespread and spreading, and because when it’s submitted to the scrutiny of God’s revelation of Himself, it explodes like a thin-skinned balloon. This is the kind of fruit we see ripening after years of poor ministry and teaching. We need to go deep.

Finally, we need perspective. Maybe Johnson’s a victim of a sports culture that places eternal significance on stuff that really shouldn’t matter. He knows that his dropped pass is way too significant for some Bills fans. He struggles to walk away from it because they can’t. I guess we’ll find out. But this is where we need perspective as we’re all guilty of getting stuff out of whack. In a world filled with people dealing with deep pain and brokenness, a dropped pass hardly registers on the scale of pain and brokenness.

This is a story worth watching and talking about. I’ve got a hunch that all the chatter generated by this story is leaving Steve Johnson to think more deeply about that pass and that tweet. And someday soon he’s going to offer some clarification and explanation. I think – or at the very least hope – too, that we’re going to hear some wonderful words from Johnson on perspective. After all, this isn’t the end of the world.