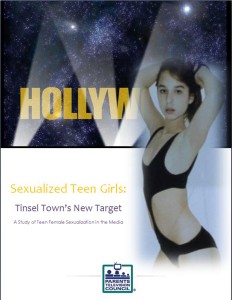 What they see is who they become. That little seven-word sentence just might capture the realities of adolescent identity formation in today’s world. Think about it. . . kids are looking for guidance and direction as they experience the powerful push and pull of the wrestling match that’s all part of forming their definition of themselves and how they choose to present themselves to the world. And because we all know that example is one of the most powerful educators, it makes sense – sadly – that in today’s media-saturated world kids are most likely to be most influenced by what they see and hear in the media. It’s not rocket science. Which is why many of us who are older often find ourselves uttering things like “I can’t believe that girl’s dressed like that!!”

This week, the Parents Television Council (PTC) released a report entitled “Sexualized Teen Girls: Tinseltown’s New Target.” The study looks at the sexualization of female teenagers in prime-time television. The report’s Executive Summary recalls a highly publicized 2007 report from the American Psychological Association that I referenced when it first came out. That report said that the sexualization of girls in the media both reflects and shapes current attitudes. It’s both cause and effect.

Now, the PTC has conducted an analysis of all scripted programs within the Neilsen ranking of the top 25 prime-time shows among viewers ages 12 to 17 during the 2009-2010 season. According to the PTC, here are the main findings:

And so our kids watch. . . learn. . . and become. Now is the time for parents, youth workers, educators, and the church to join together to save our kids from this kind of stuff. . . and even themselves. It’s time to talk about finding our identity as one made in the image of God, about finding our identity in Christ, and about living a Biblical sexual ethic that leads to deep and lasting freedom. It’s about re-shaping the answer to the question, “What in the world are we doing to our kids?!?”