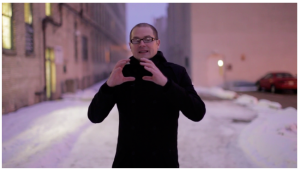 Ever since I first heard his name, Rob Bell has been creating a stir. I think I was at a National Youth Workers Convention in Sacramento when Bell debuted his Nooma Film series at an old theater just down the street from the convention center where all the youth workers had gathered. I didn’t go. I realized later that I should have. Everybody who was there was talking about what they had just seen. When I finally laid eyes on his Nooma stuff, I was very, very impressed.

A few years later, Bell was invited to speak on the main stage at the same Convention. In the first couple of cities, Bell got attendees all excited with his “new” approach to the Scriptures and preaching. I say “new” in quotes because, sadly, it was a new approach to many of the people at the convention. As I interviewed folks about what attracted them to Bell, they kept citing what was simply the good exegetical method that I had seen and heard used a the norm in the preaching of my childhood (primarily my Dad), that I had been seen modeled during my years at Geneva College and with the Coalition for Christian Outreach, and that I had been taught while a student at Gordon-Conwell Theological Seminary. Hopefully, I’ve remained faithful to using those tools in the years since. By the time we got to the third city on the Convention tour, I made sure I sat in to listen to Bell. Rather than being a positive commentary on Rob Bell, the excitement over a guy doing things the way they should be done was more a commentary on the lousy way that Bible study and preaching had been done and modeled for so long for the youth workers in that room. Rob Bell was modeling something that needed to be modeled.

Now, Bell is stirring the pot of controversy with his new book, “Love Wins: Heaven, Hell, And The Fate Of Every Person Who Ever Lived.” I’ve been catching bits and pieces of the debate, but haven’t really done any deep or time-consuming investigation of Bell’s new book. I’ve been silent for the simple reason that I haven’t read the book. I wouldn’t want people responding to something I’ve written without them carefully reading what they’re responding to. I’ve heard the accusations of universalism, and hope that Bell isn’t going down that road. People I highly respect and have come to love are coming down on both sides of the spectrum of response to the book.

So. . . yesterday my copy of Love Wins arrived. I’m hoping to start reading it soon. When I do, I hope to blog on “Rob Bell. . . During” – that is, if I have anything that might be remotely worthwhile to add to the discussion. In the same way, I hope to include some thoughts at some point on “Rob Bell. . . After.” But for now, here are a couple of thoughts on “Rob Bell. . . Before. . . ” . . . before reading the book, that is.

First, I’m looking forward to reading this book. A couple of friends have said that Bell includes some refreshing calls to regain a Biblical understanding of the redemptive drama, of the scope of the new Heaven and the new Earth, of a clear understanding or our call to integrate our faith into all of life, and to rethink what has become a very narrow theology and understanding of conversion.

Second, I’m concerned. If Rob Bell is inviting the sheep into believing a universalistic soteriology that some are saying he says is true, then I’ve been misreading the Scriptures, mislead by my teachers, and misleading folks for my entire life. Rebooting doesn’t excite me. Rebooting because Rob Bell says I should scares me.

And third, if Bell is promoting heresy, then I’m fearful. I’m fearful for all the folks who have found in Rob Bell a leader they can follow. Let’s be honest. . . Rob Bell is a very creative, very compelling, and very sexy young leader. Whether what he says is true or false, he’s got a loyal following. Which makes it all the more necessary for all of us to read carefully and evaluate what Bell is saying under the light of God’s Word. It also makes it all the more necessary for Bell to be very, very careful about what he says. People – lots of impressionable people – are listening.

Has anyone else read this book yet?