If you’ve ever visited our Center for Parent/Youth Understanding website, you know that we’re always on the lookout for what we call “culture quotes” to post. These are sentences and paragraphs that we believe are noteworthy because they give us great insight into who we’ve become, who we are, and where we’re going as a culture. We’ve been posting them for years. I love them because they serve as great discussion starters. I got especially excited when a high school teacher in Massachusetts told me that once a week he started his class with one of our quotes. The students would talk and debate about the quote, and then he’d offer a response that would serve as a great teachable moment. Great idea!

I found an interesting culture quote in this morning’s USA Today. It was in Cathy Lynn Grossman’s piece on Casey Anthony’s release from prison, “Next chapter awaits Casey Anthony.” Grossman’s article focuses on the inevitable book deals awaiting both Anthony and her parents. There’ll probably be others who get in the mix as well, spurring a small industry around the case.

Wondering whether the same publishing house that did O.J. Simpson’s “If I Did It” might do an Anthony book, Grossman interviewed the company’s president, who said “no.” The author of that O.J. book, Pablo Fenjves, said that he wote it because it was about an All-American hero who fell from grace. But would Fenjves write a book about or for Anthony? Nope. Not interested. However, he did say that he thought any book by Anthony would be a best-seller. Then. . . a culture quote from Fenjves: “Trash sells.” 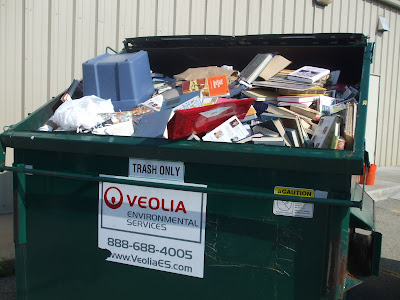 Yes, trash does sell. And it sells because. . . well. . . we buy it. Why is it that we don’t purchase, read, consume, ponder, and allow ourselves to be shaped by good stuff? Why is it that we find ourselves swimming in a culture where stuff that’s even less than mediocre is more desirable than what’s ultimately best?

Stand back and survey the landscape of stuff that you consume, whether it’s books, TV, music, etc. I’ve got a hunch that if we are honest with ourselves, we’d see that what we’ve allowed ourselves to be drawn to looks and smells more like a landfill than a lush garden. And when we consume it. . . well. . . consider what it’s doing to us.