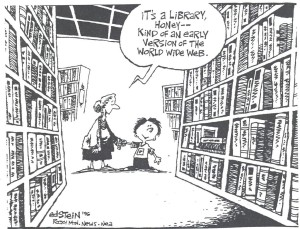 . . . and it threw me into the future that is now. Really. It’s true. Here’s what happened. I decided to head over to the library at our local college here in town. To give you some context, it’s a private liberal arts school with about 1500 traditional undergrads in the student population. It’s got a reputation for having high entrance standards, rigorous academics, and a nice little campus. It’s not cheap, either. It’s the kind of school that would be a first choice rather than a back-up on most kids’ lists.

Over the years, this library has become a favorite place for me to do research. Lots of periodicals to scan. Lots of reference materials. The latest and best databases and technology. It’s got some nice quiet nooks to hunker down in as well. But I hadn’t been in the building for a couple of years. I’m not sure if I should be embarrassed to admit that or not. During the last year I’ve had a good excuse. I was recovering from a bicycle accident and trying to catch up. Time for dedicated library research was nil. The year before that. . . I’m not sure what excuse I can throw at you. I did spend time in other libraries during that time, and I’ve been afforded additional database access from my home or office. I just haven’t been there.

So my trip yesterday was part of my quest to some more digging around as part of my continued research on Digital Kids and the effects of technology on people and our culture. I was excited to get back in there. As a kid, I never in a million years would have dreamed that a trip into a school library would be exciting. . . but it is. But something happened when I walked through the front door. Things on that first floor had changed. . . a lot. So much so that I stopped dead in my tracks and did a full 360 to take it all in.

Here’s what I saw. To my left – the periodical shelves – things looked very, very different. Half of the periodical shelves were gone. Not there. Disappeared. The empty half of that side of the room now featured some very well appointed conversation pits, couches, chairs, coffee tables, etc. Doggone it. I loved taking time to walk through and scan the periodical shelves. Now, half of the magazines and journals were gone. To my right – the main reference section – it appeared that more than half of the shelf space had vanished as well. There were fewer shelving units. The units that remained were only 2 or 3 shelves high, rather than going from the floor to ceiling. I could see all the way across the room to the opposite wall and windows. You couldn’t do that before. Too many floor to ceiling shelves. Everything looked so scant. In addition, the only people I spotted were one librarian at the main desk, and a woman who looked to be about my age tapping away furiously at one of the computer terminals that offered a gateway to the library catalog and a host of research databases and tools. The computer terminals were about the only familiar thing to me, by the way. Sure it’s summer and the students won’t be back for a few weeks, but nobody young was in that room.

OK. . . reorient. . . and try to recover as much of your usual routine as possible, I thought. So, I headed over to the remaining periodical shelves and started to scan. Didn’t take long at all. Now, over to the terminal to start doing some work. I was situated at a terminal right next to the aforementioned woman who was furiously tapping away. I thought to myself. . . seriously. . . that she must have been a peer working on some kind of research project as well. It wasn’t until I was about 20 minutes into my own research that my curiosity got the best of me and I glanced over at her terminal screen thinking that she might be working on a cure for cancer or something like that. Oh man!. . . she was playing Farmville! She continued to do so for almost an hour. Her pack of generic cigarettes sitting on the table next to her keys should have clued me in to the fact that the cancer cure wasn’t on her agenda. Yes Toto. . . we’re not in Kansas anymore.

Before heading off to other floors and time spent immersed in the book stacks, I had to go over and satisfy my curiosity by asking the librarian one simple question. “I haven’t been in here for a couple of years. I’ve noticed some changes. When and why did all this take place?” She looked at me and said, “In the last two years. And why?” Then, she reached out with two hands towards her own computer terminal, telling me without words that the digital frontier was rapidly changing the look and feel of the library.

But that wasn’t all. I proceeded to tell her that I had come in to do some research on the effects that rapidly developing technology was having on people, kids, and culture. That prompted a litany couched in frustration that I have to share. She started to rattle off a bullet list of stuff with words and descriptors that I could never find in book. Her emotion came through loud and clear. . . I just hope that my frantic scribblings after our conversation captured what she was really trying to tell me. Here it is. . .

-Students (at her school and everywhere else) don’t know how to read. They read differently in terms of brain function and page engagement than students just a few years ago. The reason? Computer screens as the mediator of words rather than the printed page. Reading has become just plain hard for them and many don’t do it.

-You won’t find many students in the library except between the hours of 9:30pm and 1am. They use it as a quiet place to study and for group work.

-Students lack skills in critical thinking. They have little desire, little ability, and little/rare skill to think about and process not only what they read, but what they hear in the classroom. . . which leads to. . .

-An inability or even willingness to try to discern truth from error. The reality is that they see no difference between fact and opinion. Their own opinion trumps fact. She used this example – “If someone tells a student that the sun is in the sky, the student will say ‘No it’s not.'” Case closed.

-And regarding authority. . . they have little or no respect for a professor, writer, or researcher who has spent a lifetime studying something in particular and who has become an expert in their field. They have no idea that someone who has studied something for years might know more than they do. She said they believe that “my opinion trumps your facts and expertise.”

-Plagiarism. . . it’s huge. Little or no concept that cutting and pasting digital documments written by others might even be wrong.

Yep. . . I stepped into a time machine and was transported into the future that is now. To be honest, none of this was really new to me. I’ve seen it and encountered it with students in classrooms where I’m the guy at the front. People have been predicting and writing about this new landscape for years. Now, it’s here.

What does this mean for those of us who are Christians, who want to learn and teach, who are raising and ministering to kids, and who want to spread the message about rigorous discipleship of the mind and the spiritual depth that follows?