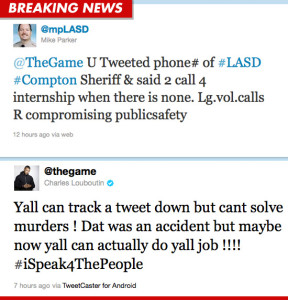 So prosecutors in Los Angeles County are deciding what they want to do with The Game. It seems that last Friday the rapper sent out a mischievous tweet to his almost 600,000 Twitter followers. The Tweet invited followers to call a number if they wanted an internship. The phone number connected directly to the Compton station of the County Sheriff’s department. As you might imagine, the folks at the Sheriff’s department weren’t too happy with the “arrival” of a telephonic flash mob.

On a side note, the term “flash mob” is new to the lexicon. Another sign of our changing times. Whenever I see that run-all-too-often flash mob commercial from AT&T (see below), I’m reminded of how fast culture changes. The commercial is tired and old. But just the other night I commented to my wife that our parents might not have a clue what’s going on in the spot. What’s “yesterday” to us has yet to get traction with the prior generation.

Back to The Game and his flash mob inciting Tweet. . . . This incident and others like it are certainly indicators of what life is becoming in our hyper-connected digital world. Recent flash mob behavior and rioting in Britain show what happens when technological tools are enlisted to indulge our deep-seated depravity. While we might want to point fingers at the technology, the reality is that the technology is only a means to sinful expression. That same sinfulness would be expressed with or without the technology. Our hearts have been finding ways to do their own thing since life in the Garden. The Narcissist will be a Narcissist with or without Twitter. Twitter just makes it easier and more expedient for the Narcissist to indulge their Narcissism in a broader and more immediate manner.

When I first heard the story on The Game, I have to admit that I chuckled a bit. That chuckle was precipitated by a deep knowledge of my own heart and behavior that always seemed to find a way to go to the line without crossing it during my adolescent years. Perhaps I did cross the line a few times. But the fact that I always got away with it led me to believe that it was just innocent fun. I confess that I was one of those people who took full advantage of the ability to enlist the phone illicitly in those oh-so-much-better pre-caller ID days. Just ask Mrs. Zwickel. That poor lady was the last entry in the residential listings of the suburban Philly phone book back before I was even a teenager. I had a good friend – who is now a pastor by the way! – who was complicit in harassing Mrs. Zwickel. We’d use the extension phone in his parents room. . . quietly. . . behind closed doors. Yes, we knew that what we were doing would get us in trouble and we had to be sneaky. My love for phone pranks spiraled down pretty quickly from there, continuing into my college years.

All that to say that there’s another way our culture has changed. By and large, the moral constraints that sent us quietly behind closed doors to indulge our devious behavior undercover are gone. Now, what was once seen as vice is now celebrated as virtue. . . or at the very least, it’s believed to be morally neutral. So, we behave boldy. Peggy Noonan’s wonderful piece in the Wall Street Journal is worth reading, as she connects the dots between what’s happening in Britain, moral decline, and what just might be on the horizon for us here in the States.

Ideas have consequences. Sadly, we don’t see the consequences until long after we’ve embraced new ideas without thought or critique. It’s the same with technology. What we see happening around and within offers convincing proof of our brokenness. I’m afraid it’s also the working out of Romans 1. . . “God gave them over. . . ”