Last week I was thumbing through a local ad paper when I spotted news on an auction that was happening at the end of the week. As I carefully read through the list of items to be sold, a small collection of antique cars caught my eye and my interest. I love old cars. Always have. So much so that whenever my birthday rolls around I remind my wife and kids of my favorite models and model year. It’s almost a 100 percent joke on my part, as there’s a fraction of one percent that would really like to wake up to a 1964 Corvette in the driveway. Red please. The closest I’ll ever come, however, is to watch the Barrett-Jackson and Mecum auctions on TV. . . which I quite often do. 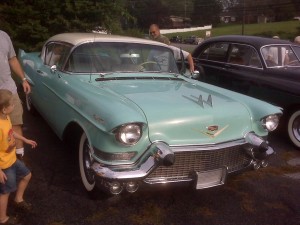 The local auction featured a 1967 Corvette, a 1957 Cadillac. . . baby blue and white. . . and a couple of other old cars. Since I had Saturday off last week, I decided to head down and check out the action. With the cars going last, I had a chance to socialize with some friends I hadn’t seen in awhile and to watch some folks spend lots and lots of money on assorted stuff, furniture, land, and a house. The Corvette went for about $30,000. The Cadillac – which was a car I would have loved to take home to tinker with – went for about $24,000. That’s why I don’t own either of those cars or anything like them!

On my short drive home I got to thinking about my desire to own an old car and wondered what it would be like. I thought about the “why” behind my desire. I wonder if we collect things because they make us feel good. I know we’re prone to accumulate all kinds of stuff (material goods, experiences, etc.) with the belief that somehow those things will fix us and fix what’s wrong with our world. We believe that if we go to bed owning this or that tonight, somehow tomorrow will be so much better. Never happens though. Then I realized that all the cool stuff I saw auctioned off on Saturday had once belonged to somebody. That somebody had died and all that stuff remained. Now, that stuff’s been auctioned off to a couple hundred people who someday will leave this earth without their stuff as well. I guess being an auctioneer is a pretty secure job.

The great irony of all this is that on Saturday I received a package in the mail from Zondervan. It was a new book by one of my favorite authors, Paul Tripp. This one’s titled Forever: You Can’t Live Without It. Excited about the book, I sat down and started reading. Paul’s done a great job of reminding us that we need to live in light of eternity. Here on this earth is not all that we have. And when we live in light of eternity something happens to us in terms of our view of material stuff, our understanding of marriage and family, the way we approach parenting, and how we deal with suffering. It’s so, so true. Understanding the reality of why we’re here, what went wrong, how God has intervened to make things right, and the future that those who are in Christ face. . . well, it all makes so much sense. No, there’s be nothing wrong with me having an old car. The problem would be rooted in what I would allow the car to become to me and what I think the car would do for me. If I somehow see a purchase – of anything! – as redemptive, life-giving, fulfilling, or salvific. . . well, I have worked to fill my empty heart with something that can never fill it, and I will only wind up more empty. As Paul says, all our dreams are “gas” that will only vaporize in our hands.

Lisa and I often ponder travel and experiences in this light as we banter back and forth about where we haven’t been, what we haven’t experienced, and where we’d like to go. Her frequent mentions of “someplace tropical” where the water is really blue have never been realized by us. Someday we’ll get there. When we talk about it, we realize that the “someday” might be in this life, or it might be in the forever. What a joy to know that our years on this earth are not all that we have. The new Heaven and the new Earth are going to be amazing and beyond belief. I joke when I say that I’ll be able to drive her to the beach and the blue water in my 1964 Vette. I’m guessing that once we’re there, the amazing wonder of what is will immediately eclipse the greatest dreams our imaginations could ever conjure up. . . and those dreams just won’t matter anymore.

We live in a world that believes that all there is to life is the here and now. That perspective kills us. I want to recommend Paul Tripp’s Forever to you. Read it and be changed. And for those of you who work with kids, this is a book that offers the antidote to what ails so many of them.