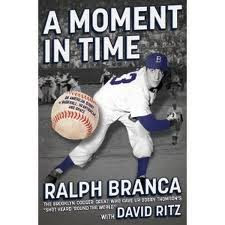 Last week I caught the tail-end of a radio interview with Ralph Branca. If I had heard his name before, I didn’t remember it. I do, however, know the name of Bobby Thomson. . . the man used his bat in 1951 to help the Giants win the pennant with the legendary home run known simply as “The Shot Heard Round the World.” Branca has the notorious distinction of being “the goat” who served up the pitch Thomson hit. If you haven’t seen the amazing footage of the moment, you can watch it here. . . and see where it’s rated in terms of amazing baseball plays. It’s at #1.

For 50 years – since that day in October 1951 – nobody knew what was really going on. Thanks to a Wall Street Journal reporter named Joshua Harris Prager, the truth about the hit and the Giants amazing comeback to win the pennant was finally revealed in 2001. It seems that about halfway through the season, the Giants had developed an elaborate scheme for stealing signs that not only turned their season around, but elevated stats for many of the players on the team, including Bobby Thomson. When they were playing at home, the Giants employed a high-powered pair of military binoculars hidden behind a window in a darkened room in the team’s center field clubhouse. After seeing the catcher’s sign, an elaborate series of wires and buzzers sent info to both the Giants’ bullpen and dugout. From the bullpen, a towel was used to signal the batter. From the dugout, players yelled code words to the batter to let him known what pitch was coming. If the batter missed one signal, he could rely on the other. When the Giant’s were playing away, the team found ways to employ the system from the outfield bleachers. It turned their season around. Bobby Thomson knew a fastball was coming. In that game as in so many other Giants’ games that year, the team cheated.

Three years after serving up the pitch that ended the dreams of so many Brooklyn Dodger fans, Branca was told the truth. It was verified several times both immediately and over the years. Branca’s friends and family encouraged him to blow the lid off the story, but he refused. He didn’t want to be a cry-baby or sore loser. So, he remained dignified in his silence. Then, Harris broke the story and Branca was free to talk.

Yesterday I read Branca’s brand new book about that day – A Moment in Time: An American Story of Baseball, Heartbreak, and Grace. The book was stirring, challenging, and thought-provoking in some amazing ways. There’s something deeply Godly about maintaining your integrity, showing grace, and keeping your lips sealed when speaking up would only serve to clear your name and reputation. We know that the Lord has said, “Vengeance is mine.”

At the end of his book, Branca says that he has yet to forgive those who conjured up the scheme, but he’s working on it. Ralph Branca is now 85-years-old. His story is one we need to hear and tell.