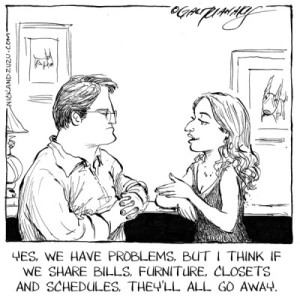 Earlier today I was finishing a run-through of the September issue of Christianity Today magazine when I ran across a little interview with Glenn Stanton on “The Science of Shacking Up.” Stanton’s the author of The Ring Makes All The Difference: The Hidden Consequences of Cohabitation and the Strong Benefits of Marriage, a book that focuses on the scientific evidence about the dangers and downfalls of cohabitation.

The last question interviewer Caryn Rivandeneira asks Stanton is this: “What would you say to a those who believe cohabitation can help people marry the ‘right person’?” OK. . . now you’ve really got my attention as I hear this argument all the time. Stanton begins his answer with a great little quote from Christian ethicist Stanley Hauerwas of Duke University. That little quote is from an article Hauerwas penned in 1978 in which he refers to his own law. . . known now as Hauerwas’s Law. . . which is this: “You always marry the wrong person.” Stanton goes on to explain that Hauerwas’s Law is so important to grasp and the sooner young couples can understand that, the better off they’ll be. Young couples typically protest by asking, “You mean you don’t want us to be soul mates?” Hauerwas knew that nobody marries their soul mate. Rather, you become soul mates as you live together and love each other over the course of your married life.

Here’s Hauerwas’s Law in its original context from that 1978 article: “Most of the literature that attempts to instruct us about getting along in marriage fails to face up to a fact so clearly true that I have dared to call it Hauerwas’s Law: You always marry the wrong person. It is as important to note, of course, as Herbert Richardson pointed out to me, that the reverse of the law is also true: namely, that you also always marry the right person. The point of the law is to suggest the inadequacy of the current assumption that the success or failure of a marriage can be determined by marrying the “right person.” Even if you have married the “right person,” there is no guarantee that he or she will remain such, for people have a disturbing tendency to change. Indeed, it seems that many so-called “happy marriages” are such because of the partners’ efforts to preserve “love” by preventing either from changing. This law is meant not only to challenge current romantic assumptions but to point out that marriage is a more basic reality than the interpersonal relations which may or may not characterize a particular marriage. Indeed, the demand that those in a marriage love one another requires that marriage have a basis other than the love itself. For it is only on such a basis that we can have any idea of how we should love.”

So. . . even though I married the wrong person, I know that today I am married to the right person. . . a reality that will be even more true tomorrow.