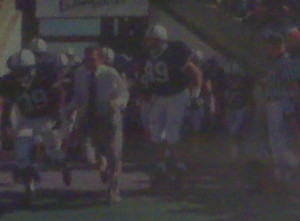 Yesterday morning I was sitting with my wife in the Susquehanna Club at the Harrisburg International Airport. The TV to our left was on Fox News. I looked above Lisa’s head and saw a large framed photo on the wall that I’ve seen many times before. I said to her, “Turn around and look at who’s on the wall above you.” I snapped a photo of that photo with my phone. The photo I took is to the left. It’s a familiar scene that’s been happening on Saturdays for years a few miles north of where we sat. There was Joe Paterno leading his Nittany Lion team onto the field in what has become known as Happy Valley. At the exact moment I was taking the picture, a story broke on the TV. . . Joe Paterno had just announced that he was retiring at the end of the year. No joke, exact moment.

I love football and I have followed Penn State over the years. I know several people who have played for JoePa. This year, one of the team’s leading players is the son of a man who was a part of my earliest youth ministry efforts. As I blogged two days ago, my son Josh had been coached at camp by Jerry Sandusky when Josh was a middle school player. We have a picture of the two together. I admired Sandusky for his charitable work with children.

Yesterday, I tried to verbalize the feelings I was having to my wife, Lisa. My friend Adam McLane had asked me to put it all in perspective for people who don’t live here in Pennsylvania. Adam’s question had me struggling to find words to describe the feeling I had. What I said to Lisa has nothing to do with Penn State and football. To be honest, I don’t bleed blue and white. What I was feeling was more a response to being duped. . . deceived. . . fooled. I don’t think I would have been able to find the words for my emotions or even had those emotions if I hadn’t had a couple of unfortunate opportunities to have experienced those emotions already in some very deep and personal ways over the last few years in situations that are eerily similar. The Penn State situation simply triggered memories and emotions in ways that allow me (in some small manner) to understand what folks in the Penn State situation are feeling. It’s like walking into your house after it’s been turned upside down by burglars. . . something else I’ve experienced. 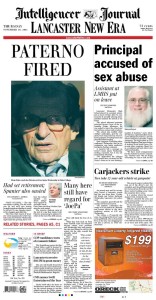 This morning, I woke up to see the newspaper front page you see on the right. Yep, JoePa and news of his firing was there. . . big and bold. But look at the headline to the right. The assistant principal at Lancaster Mennonite High School. . . and sexual abuse. What’s next?

I made a statement in my last blog that some people have taken issue with. I wrote: “Welcome to our contemporary world. In a culture saturated with sick and sinful distortions of God’s good gift of sexuality, it’s no wonder this stuff happens with increased frequency and depth. It’s going to be happening more. That should make us wonder: if it starts to happen more, when will it be normalized, overlooked, and no longer criminal?” I stand by that statement. . . with even greater commitment this morning. There is a biblical sexual ethic that’s been given to us by the One who created the amazing gift of sexuality. There’s a competing cultural sexual ethic that continues to evolve. . . a compelling and convincing ethic that’s grabbing hearts, minds, and human beings. . . convincing them that anything goes.

First, it can be anybody. . . even you. As I said in a youth worker forum last week, all of us are just one split second and one bad decision away from doing this stuff. A good and proper understanding of human depravity and sin is a tool that can keep each of us in check. And, don’t be surprised when those closest to you who you might trust the most choose this stuff and eventually get exposed. It happens.

Second, let’s talk about sex. I know that these cases are incredibly complex. But if we don’t set and continue to set the table for kids in terms of their understanding of sexuality, they will learn, buy into, and live the lies. Then, the more the lies take root deep and wide, the less we’ll be concerned about what the Scriptures call sin. Vice will become virtue. . . something that will destroy ourselves and others.

Third, our churches and youth groups are places where this stuff is happening. We can’t keep looking the other way. Two of the biggest mistakes we make are to not have systems already in place for dealing with this stuff, and refusing to believe that what’s been done has been done. . . and then blaming the victims or those whose hands were forced to respond.

And finally, I believe Penn State did the right thing last night. Yes, JoePa has done much for the University and college football. Yes, Jerry Sandusky was the perpetrator. But when there’s a system in place that lets time pass, that covers things up, that looks the other way, that minimizes something that can’t be minimized. . . well, then that system needs to be purged. JoePa’s sin was a sin of omission that was occasioned, perhaps, by years of living in a world where people would sweep these things under the rug and look the other way.

My home state is now a stage that the country is watching. But this is a story about us all.