Last week I spotted an article on shopping that classified the different types of shoppers that we are. Appropriate, I guess, in the midst of the busiest shopping time of the year. 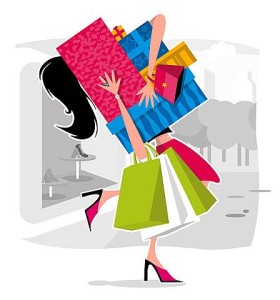 The article got me thinking about a shopping phrase I’ve heard a few times in recent years. . . usually from people who you think would know better than to use it. The phrase? . . . “retail therapy.” I got to wondering how entrenched the phrase really is so I googled it and found that there’s actually an entry and a definition in Wikipedia. Here it is. . .

Retail therapy was first used as a term in the 1980s with the first reference being this sentence in the Chicago Tribune of Christmas Eve 1986: “We’ve become a nation measuring out our lives in shopping bags and nursing our psychic ills through retail therapy.”[citation needed]

In 2001, the European Union conducted a study finding that 33% of shoppers surveyed had “high level of addiction to rush or unnecessary consumption”.[1] This was causing debt problems for many with the problem being particularly bad in young Scottish people.

Researchers at Melbourne University have advocated its classification as a psychological disorder called oniomania or compulsive shopping disorder.

I find it sad and ironic that at the very time we should be celebrating the coming of the One True Redeemer, we spend our time, money, and effort looking for redemption at the mall. It never works though. Didn’t we listen to what John Mayer sang in “Something’s Missing”? . . .

As a young child, I thought that all the stuff Christmas morning would bring would fill me up, make me happy, complete my life. But in a few hours, I could see the gauge on my satisfaction level dropping. Then, the next Christmas, the vicious cycle would begin all over again. It’s because we look in all the wrong places. Many of us who are Christians complain about the fact that the cashier is not allowed to say “Merry Christmas” anymore. It’s “Happy Holiday” only. They took Christ out of Christmas! But so do we when we think that stuff will make us happy.

The late Mother Theresa warned about this empty cycle that so easily entraps: “Once the longing for money comes, the longing also comes for what money can give – superfluities – nice rooms – luxuries at table – more clothes – fans – and so on. Our needs will increase – for one thing brings another – and the result will be endless dissatisfaction.”

Are you there yet? It’s been a week and a day since you opened your presents. If you’re feeling empty, don’t be surprised. That’s why we have Christmas to celebrate in the first place. He’s the “something missing” . . . and He came to fix it.