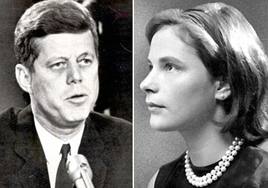 I’ve hesitated writing today’s blog entry for two reasons. First, I’m still trying to process what I saw and heard last night in the Rock Center interview with Mimi Alford. Second, the whole story seems to verge on being “soap-opera-ish”. . . which makes me feel a little dirty even talking about it. But it’s about real life. It offers deep and important insights into the human condition. It provides strong evidence of shifts in culture. And, I think we can learn from it.

Today’s blog entry comes out of the nexus of two real-life stories that have grabbed and held my attention. One of those stories grabbed me when I was just 7-years-old and it’s been holding me ever since. The other story has gripped me since November of last year. The former is about John F. Kennedy, the young President who was assassinated when I was in second grade – an event that I can replay in my mind in vivid detail. I’ve been fascinated by that event and Kennedy’s Presidency ever since. It’s a significant childhood marker for me. The latter story is the now-familiar and yet-unfinished child-abuse scandal at Penn State University. That one’s gripped me because it’s combined with other events in recent years to open my eyes to the hidden yet all-too-widespread dark side of life in our world.

Briefly, Mimi Alford just released a book about her affair with the President. At the time, the President was in his mid-40’s. He initiated the whole thing. Alford was a 19-year-old college student interning at the White House. She was a virgin who had only kissed a boy once. . . in 8th grade. Alford was outed by a historian in 2003 who wrote about the affair in his book on Kennedy. She had no intention of ever telling her story publicly. It’s only since then that she has decided -with hesitation – to tell her story. It seems rather clear that this isn’t something prompted by a desire for fame and fortune.

If you haven’t watched the interview from Rock Center with Meredith Viera, you should. Again, it offers a fascinating peek into the cultural mores of the time, along with lots of discussion fodder on human nature. There’s much rattling around in my head as a result of what I watched. Kennedy was a philanderer who was somehow adept at compartmentalizing his life and justifying his infidelity. This has been known for a long time and the interview only confirms and cements what we already know. With the press serving to protect him as well through their turned heads and silence, it truly was a different time. We also know that even though these things were not public, they were there. That confirms the fact that there’s nothing new under the sun and that the human heart has always been polluted by sin and bent towards wrong-doing. There’s much more I’ve been pondering as well.

But here’s the big takeaway. . . What Mimi Alford described last night to Meredith Viera offers a huge window into the mind of the victim. Sure, some would argue that Alford wasn’t a victim here. She herself admitted that she went along with it all and even enjoyed it. But it is clear that Kennedy used his position, his power, and his ability to persuade to start and continue an illicit affair with a teenager who was 25-years-younger than himself. She went along with it. . . remained silent. . . etc. She was naive, stupid, whatever you want to call her. In the end, Mimi Alford comes off as looking incredibly foolish and easily swayed/manipulated. I think she was both. But then you hear the stories of other adults (Jerry Sandusky, etc.) who carefully and with great calculation know exactly what they are doing as they choose to indulge their sinful inclinations and pathologies by grooming, cultivating, and then violating young people sexually, emotionally, or otherwise. As we talked about the interview in the office this morning, we discussed the fact that this was calculated, consensual, and criminal.

We need to carefully consider, understand, and uncover instances where this may be taking place where we live. To my youth worker friends. . . examine yourselves, examine your volunteers, listen for hints from your students. . . these things happen everywhere and they’re happening more and more. Understand that as someone in ministry you have position, you have power, and you have the ability to persuade. Don’t ever, ever, ever abuse any of those things. . . or the precious young lives committed to your care.

Visit msnbc.com for breaking news, world news, and news about the economy