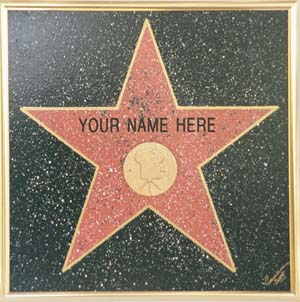 We live in a day and age where our culture is the sea that plays host to a perfect storm of divergent systems that have come together to create a kind of idolatry that we might not even recognize. In fact, sometimes I think we’ve come to love getting tossed around in these waves. After all, we do have a sinister and powerful bent towards these things. It’s a perfect storm related to and promoting the pursuit and worship of celebrity. Why do you think we can’t get away from all the “breaking news” about Tom and Katie?
The explosion of media outlets has elevated the rich, famous, and those whose “15 minutes” has extended indefinitely to the forefront as our heroes and role models. YouTube and other social media encourage and allow those who worship celebrities to pursue and build their own audience. Excessive self-love – aka “Narcissism” – has moved from vice to virtue as high-profile celebrities more often than not selfishly embrace and promote themselves, thereby modeling for followers young and old alike a path we too often embrace. We value style and appearance rather than depth and character. And, in a day and age where we talk about ourselves as “brands” rather than persons. . . well, we go all out in marketing ourselves to build our “brand.” If you spend any time watching culture, you know these things (and more, sadly) to be true.
But it’s not just happening “out there.” Let’s be honest, the same perfect storm is raging in our Christian culture.

But let’s be fair. In the midst of the cons, there have to be pros. . . right? I continue to think long and hard about this. What are the pros? And what are the cons? To be honest, when Rick Lawrence at GROUP asked me about the pros and cons of Christian celebrity over a year ago, I struggled to come up with any pros. . . but I did discover one.

When the Christian celebrity has not sought out the spotlight, but has rather been thrust there due to their faithful and obedient service to Christ and consistent modeling of Christian character and humility, then that’s a good thing. While we must always strive to first and foremost be Christlike, it’s still good to have flesh and blood contemporary role models and heroes of the faith to look up to.  . . but not worship. I think of people like Joni Erickson Tada, Tony Dungy, N.T. Wright, John Stott, Mother Theresa, and Billy Graham. None of them have sought the spotlight. All have endeavored to embrace humility. Each is aware of his/her deep shortcomings. All are faithful and obedient servants. And all of them would recoil at the thought of being a celebrity as they want nothing more than to serve as signposts to Jesus. I like to be able to point my kids to people like this. It’s also nice to know that they don’t give the watching world legitimate reasons  – as many Christian celebrities do – to mock us as fools.
The cons? My list here was quickly built and much, much longer. The culture of Christian celebrity:
Rarely is Christian celebrity good for the celebrity. Rarely is Christian celebrity good for the church. There’s a reason why the Bible is so clear on the seductive dangers that can come with money, sex, and power. It’s sadly ironic that that those thrust to the forefront who have been given the stage to speak the truth about these things, are  oftentimes more prone to fall victim to their temptations. Have you paid attention to the news over the last several years?
As I’ve wrestled with these things over the course of my own life and ministry, I’ve tried to remain true to a few little rules I’ve set up for myself. Never think too highly of yourself. You’re no different than anyone else. Pursue the Savior and not the stage. Be yourself. Endeavor to be faithful and obedient to Christ. Your calling is NOT to please people. And if you ever find yourself in a position where you’re saying things and people are listening. . . carefully choose your words because there are people who will believe anything and everything you say. And one more thing. . . surround yourself with people who aren’t the least bit impressed with you and who will always remind you of these rules!