I often wonder if our culture’s most revered golden calf is sport. Of course, you can build a case that money, sex and power are the most seductive idols we face, but even that trio combines to tarnish what sport can and should be. Consider overpaid and self-indulgent athletes and those who aspire to grow up to be just like them. With the Olympics just a few days away, maybe it’s time to prepare ourselves to watch the games while making a conscious effort to discern how competitors, fans, and cultures alike engage with sport in ways that we should, and in ways that we shouldn’t. Some sporting things I saw and heard last weekend reminded me of just how important this exercise is. 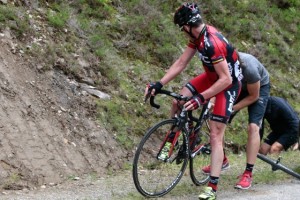 On the upside – or an example of what sport should be – was Sunday’s Stage 14 in the Tour de France. I’ve been watching this bike race for years and every year I become more fascinated at all that’s involved in bicycle racing. The stamina and fearlessness of the athletes, the complexity of the strategy, and the drama in the race all combine to make it very, very interesting. Unless you’ve watched the Tour, it’s easy to assume that the race is all about everyone trying to be the fastest to finish line. Not so. The teamwork and strategy is amazing. And even if you’re not a fan of bike racing, watching on an HD TV affords views of some spectacular French scenery, architecture, and history.


I was watching Sunday’s Stage 14 when tires started to get punctured. The announcers began to wonder out loud about sabotage on the course and the possibility of tacks.
Their speculation proved to be correct with over $10,000 of tires destroyed by someone’s devious behavior. But an example of what sport should be quickly transpired in the midst of all the craziness. Defending champion Cadel Evans blew tires three times, causing him to fall back significantly while waiting for new tires or a bike change. Currently sitting in fourth place, Evans’ delays could have been used by race leader Bradley Wiggins to further pad his lead. But in a show of amazing sportsmanship, Wiggins slowed the field so that by stage’s end, Evans had not lost any ground in his fight to take the lead. It was a beautiful thing to watch. That’s the way it should be.


On the downside – or an example of what sport has come to mean to us and what sport shouldn’t be – was   what I witnessed at a boys’ lacrosse tournament here in the mid-state. I popped over to watch the under-15 team my son coaches play a couple of games. The tournament was being played at five venues, each with multiple fields. The place was packed with players and parents. It’s only been two years since I myself was a parent sitting on the sidelines, by my oh my how things have changed. Parents who were spending big money and lots of time to come from all over the Northeast for the weekend were acting like. . . well. . . I’m not sure what the most appropriate word to use here might be. Some of the more proper descriptors would be things like “spoiled,” “entitled,” and “obnoxious.” There was a lot of vicarious living taking place outside the lines. It was difficult to watch. I imagined how difficult it would be to stand in the midst of that as a player on the field.


As one game came to an end in a tie, the two coaches pulled their players off the field to give instructions for the sudden-death format. In this case, it was going to be a full-field 2-on-2 format. Each team had a goalie, and each team had a field player to engage in the face-off and subsequent play. The other team’s field player quickly won the face-off and took the ball down the field and quickly shot wide. Change of possession. The player on my son’s team struggled to carry the ball up field. By the time he reached mid-field his speed had allowed him to break free from his opponent and  run a step ahead all the way to the goal. His first shot got past the goalie and the game was over. Immediately, the players on Josh’s team erupted in celebration and rushed the field. And immediately, the 14-year-old player from the other team fell to the ground face down and sobbed to the point where his body was almost convulsing.

I thought that moment was telling. I can only imagine why that boy was taking it so hard. Was winning that important? Was losing that devastating? Was he anticipating facing the disappointment of his father? Was there something else going on? Why can’t we just play and enjoy the game? It’s really not that big a deal.

Just a few minutes earlier I was standing there looking at my own son coaching. I couldn’t believe that the years had passed so quickly. I couldn’t believe that he’s a man. And I thought about the first lesson his first tee-ball coach verbalized way back in 1992. . . “learn, try hard, have fun.” If there’s anything about sport that should sweep us up, it should be the opportunity to glorify God and to enjoy His good gift of sport. And never should we make this good thing called “sport” into the ultimate thing.