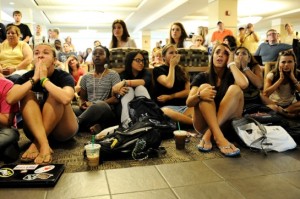 Rewind one year. Put yourself back in that time and place. Now that you’re there, think about college sports, the NCAA, Penn State football, Joe Paterno, and the issue of child sexual abuse. Now, fast-forward 12 months to today. Who would have imagined? Who could’ve imagined? Today, we’re forced to think more deeply (or at least we should be) to think about how the good thing of sport that we should enjoy with playfulness has become an ultimate thing. . . an idol even. Today, the NCAA and its leadership is seen as either hero or goat. The Penn State football machine is breaking down.  Joe Paterno has been dead for six months. . . and was disgraced both before and after his passing. Finally. . . and this is a good thing. . . the issue of child sexual abuse (perpetrators and victims) is on our radar like never before. Once again, Bob Dylan was right. The times they are a changin’.
The response to the latest developments in this ongoing story were immediate and strong. The NCAA held their press conference yesterday morning to announce that they had issued sanctions. . . and the sanctions were strong. The responses to those sanctions – both positive and negative – have been even stronger.  I’ve read responses that span the spectrum from “serves Penn State right” to “the NCAA can rot in hell.” As a Christian, I realize that my response needs to be carefully crafted and articulated in ways that are thoughtful, theologically-informed, and culturally-aware.

There’s more going on here than meets the eye. None of us will ever be able to unpack and understand it fully. Right now, we see things dimly. But’s that’s no excuse to not think in ways that apply the Gospel to what’s going on.

That said, here are some initial and incomplete thoughts. I wonder if they might serve to get some discussion going. Keep in mind that the resulting discussion among friends should serve to sharpen and hone our understanding and response.
1. We can never forget that ideas and actions have consequences. Jerry Sandusky carefully and deliberately built and detonated a bomb. The aftershocks, fall-out, and shrapnel of the bombs we build spread far and wide. My actions, my sin, my choices. . . they don’t just affect me.
2. A good friend who was a scholarship athlete at Penn State offered me the best short summary of the mess that I’ve heard yet: “If Joe knew, they had no excuse.”
3. The people who have spent the most time working on this case are the people who know the most. They are also the people who have made the decisions. This includes people from the criminal justice system, the NCAA, the Penn State board and administration, and the Freeh Report. I think it’s significant that at this point, none of these entities appear to have any major disagreements or issues with the others. Does that indicate recognition of a deep-seated and on-going problem?
4. An institution of higher education is an institution of higher education. Education should be the tail that wags the dog. Intercollegiate athletics is an extra-curricular activity. A university does not exist for the sake of its football team. While Penn State has become the “poster boy” for misplaced priorities and a culture centered on football (again. . . idolatry even), Penn State is not alone. And while Penn State has been forced to deal with these issues, our culture and every one of us who lives in it should step back to see if we are putting too much stock, hope and allegiance into sport.
5. Another friend said this: “I believe that when an institution is corrupt or fails to protect, then the institution pays.”
6. There’s been a lot of talk about how the NCAA sanctions are hurting the Penn State students. To be honest, I’m not sure how that’s true. If the institution is about academics, then football sanctions don’t hurt the students. If the institution is about football, then the sanctions do hurt the students.  .  . but then the concerns of many are fully justified.  Some will say that the $60 million dollar penalties will hurt the students. We have yet to see how that will play out.
7. Most importantly, those who are making decisions in this case must keep the victims (known and unknown) in the forefront as decisions are made. For too long, we have been living in a cultural that blames sexual abuse victims. Hopefully, the tide is turning and we will now minister to sexual abuse victims.
As this saga continues to unfold, don’t just monitor the story. Monitor your response to the story. Perhaps it will be your response that is most eye-opening. Your response (and mine) will tell us much about ourselves. Then, we must put what we learn about ourselves under the microscope of God’s Word.