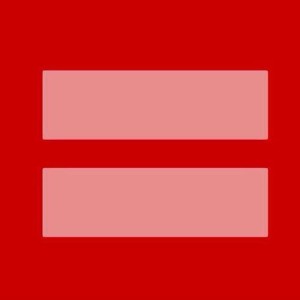 “Get off my property. . . and get off NOW!” I  remember hearing those words. . . several times. . . from the elderly gentleman (we’ll just call him “Mr. W” here) who had the unfortunate privilege of owning the house on the corner that happened to be where our elementary school bus stop stood for all those early years of my schooling. He watched us like a hawk. And every time our feet would wander off the concrete sidewalk and onto his grass, he would open the door and let us know about it. During our younger years, he was frightening. By the time we got a little bit older, our feet would trespass purposefully in an effort to get him to do what had become predictable and laughable to us.

Good old Mr. W has come to mind a few times over the last few days as the debate over same-sex marriage has been heating up. The rhetoric and mud-slinging has. . . not surprisingly. . . increased.  Social media has lit up with what’s now known as the “marriage equality icon” and creative or not-so-creative mutations of that icon that have been tweaked to sarcastically and cynically get numerous other opposing agendas across. Sadly, hastily throwing around reactive words and icons is sometimes the best that we can do or even choose to do. . . and it’s not the least bit engaging, beneficial, or productive. Nor does it honor God.

Because I think that the Spring of 2013 will be remembered by history as a watershed cultural moment as it relates to marriage, faith, and a whole lot of other related issues, I’ve been very targeted in my reading, discussion, prayer, and contemplation over the issue of same-sex marriage. Not only am I working to refine and cement what it is I believe on this issue, but I’m pondering how to most constructively and Christianly (i.e. “God-honoring”) engage in thoughtful conversations with those who don’t agree with me. And, for the record, I believe that marriage has been instituted by God to be entered into by one man and one woman.

So, why would I ever say that “gay marriage is good for the church?” I say that because the current debate and wherever it ends is serving to wake us up, to sharpen us, and to get us thinking about and doing things that we need to be thinking and doing. For the record. . . again. . . I think it’s only a matter of time before gay marriage is commonplace from coast to coast. One of my concerns is that many of my Christian brothers and sisters will interpret this reality as a loss of territory. That people who support same-sex marriage will have “wandered onto our property” and that the best we should and could do is simply open the front door and fire off a series of volleys where we yell “get off my property. . . and get off NOW!” That approach. . . as we’re seeing. . . is just plain silly and non-productive. Shouldn’t we be inviting people into the joy of Kingdom-living?

The current debate is good for the church because it forces us to see that God is in control. . . not us. It reminds us that these issues are far more complex and difficult than we’ve made them out to be. It causes us to see people. . . real people. . . people just like us. . . who are dealing with difficult and complex issues in their lives. It forces us to confront our own glaring sin. It makes us. . . or at least it should make us. . . dig deep into the Scriptures to come to an understanding that will yield ongoing grace-filled conversations marked by give-and-take with people who might not see things the way we do. . . rather than one-way conversations marked by our grace-less yelling which we arrogantly expect can and should result in obedience. It will awaken us to the fact that cliches, reactive social media icons, and organized protests don’t do much more than turn off the very people we hope to influence. The current debate is good for us because it will make us face our ignorance and increase our dependence on God. As culture changes, God is in the midst of changing us. . . perhaps where it’s needed most. . .  at the level of our sin of spiritual arrogance and pride.

Last night as I was laying in bed trying to sort out all that was running around in my head, I had this thought: The current debate should not be about followers of Jesus lording it over others so that they will conform to our wishes. Rather, it should lead us to a deeper life lived humbly under the Lordship of Jesus so that we will be obedient to Him. That, I think, will change the way we engage in this debate. Who knows what God will bring from all of this? I’m wondering if the primary change God is working to bring about in all this might be the deepening of His people in their knowledge of and humble commitment to and reliance on Him. Maybe we need a little refining. . . or a whole lot.

Some past blog posts on this topic. . . .
Rob Bell, Homosexual Marriage, and Our Changing Times. . .
Wrestling With Homosexuality. . . What’s A Christian to Do? . . .
An Open Letter to the Church from a Lesbian