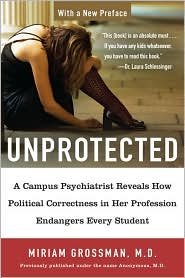 “This lady gets it.” That’s what my buddy Marv Penner enthusiastically told me when he called me for the sole purpose of asking me if I had read Miriam Grossman’s Unprotected: A Campus Psychiatrist Reveals How Political Correctness in Her Profession Endangers Every Student. Marv was plowing through the book and wanted to be sure that I didn’t miss this one. I didn’t. I read it last week. . . and it boldly confirms what many of us have been seeing in the world of kids for quite some time. 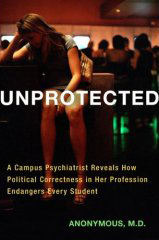 Grossman has been counseling and treating students for almost three decades now, most recently at UCLA Student Psychological Services. When Unprotected was first published back in 2006, Grossman’s name wasn’t on the cover. Rather, the book’s author was identified only as “Anonymous, M.D.” Grossman was hesitant to identify herself as she was calling out the entire field of campus health and counseling, including organizations like the American College Health Association, the American Psychological and Psychiatric associations, Planned Parenthood, Columbia University, and others. Grossman was talking and writing about things that she and her peers were taught to never talk or write about.

Don’t think for a minute that Grossman isn’t proud of her work. She is. But there’s a price to pay for pulling back the curtain on what’s really going on in the campus community, both among students and those who provide them with moral guidance on matters of sexuality and health. Grossman says that Unprotected “tells the stories of college students who are casualties of the radical activism” in Grossman’s profession. And so, the book tells the grim story of what’s happening on campus through the stories of students and young adults struggling with sexuality, STD’s, pregnancy, abortion, self-injury, disordered eating, and more.

In the book’s conclusion, Grossman tells of the moment when she shared with a colleague her concern about the omission at her center of questions about sexually transmitted diseases and abortions. She thought. . . rightly so. . . that this omission was very unwise. Her friend agreed. Then, both admitted to the other that they both did, in fact, break professional protocol by broaching these and other “taboo” subjects with students. At that moment, both of them realized that even after all those years of working side by side, their silence with each other was rooted in their mutual fear of challenging the entrenched dogma of their profession. She writes, “The concerns Joanne and I shared about our patients – the physical and emotional harm of the anything-goes mentality, the devastating consequences of abortion, hookups, and STDs – are not politically correct. We feared sharing our views in an atmosphere perceived as intolerant; we were not prepared to risk malignment or ostracism.”

Let me float an idea here that I couldn’t shake as I read Grossman’s account of this conversation. I think we are close to. . . if not already in. . . a situation where we are so divided in the church (and our youth ministry world) on how to best handle these and other ethical issues that those who feel the need to speak the truth’s of God’s Word in love wonder when, if, and how to open their mouths out of fear. To be more specific, there are those who are afraid to speak up from the perspective of historical orthodoxy because that perspective is seen as hopelessly outdated, old-fashioned, and irrelevant in our rapidly changing culture.

I’ve pondered Grossman’s prescriptions and thought about what they might mean for us as Christians endeavoring to live to the glory of God in the church and world. . . and in our youth ministry world. After all, there is so much at stake. Consider what Grossman suggests.

First, “like a patient unaware of his illness, the first step is acknowledgement that all is not well.” Grossman says that her profession has been hijacked by “repressive, radical ideologies” and that those who dissent are “intimidated and silenced.” Keep your eyes open. . . this is happening in our ministry world as well.

Second, Grossman says we need to realize that these “radical agendas – promoted in the name of patient welfare and positive social change – are a prescription for disaster.” Scripture and history tell us that agendas contrary to God’s will and way will only lead to disaster as well.

Finally, Grossman knows that way too much hangs in the balance. After all, she’s talking about dealing with vulnerable young people who have much to lose. “What we say or don’t say will have far-reaching effects: the responsibility is awesome.” She says that what we need is straight talk with all the facts. The same goes for us in the church as well in regards to everything God says about everything in life.

This morning I ran across this quote from theologian John Stott, penned almost fifty years ago: “These then are the marks of the ideal Church – love, suffering, holiness, sound doctrine, genuineness, evangelism and humility. They are what Christ desires to find in His churches as He walks among them.” Oh how we need the balance of all of these elements mentioned by Stott. We need to lovingly, humbly, and gracefully tell the truth in a church, youth ministry world, and day-and-age where increasingly we’re losing our willingness and ability to even know what the truth is. If we don’t, much will be lost.