Like most kids at the time, I spent my early-1960s elementary school years “smoking” candy cigarettes, el bubble brand bubblegum cigars, and foil-filled look-alike cigarettes that emitted a chalk-dust haze when you’d blow through one end and out the other. At the time, The Flintstones’ animated adventures were sponsored by Winston Cigarettes, meaning that Fred and Barney were featured in commercials where they sat up against the house taking leisurely drags on animated smokes. As kids, we were being nurtured to grow into smokers, and many of my friends did. It’s not at all surprising that even though I came from a smoke-free family, I tried to light up for the first time at the age of five. 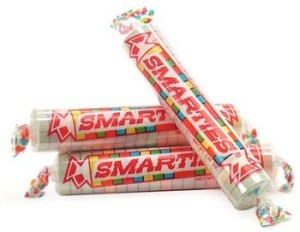 In today’s world, kids are still using candy to imitate foolish and even illegal “adult” behaviors. And thanks to the Internet and close to 10,000 homemade YouTube tutorial videos, snorting and smoking the cellophane-enclosed rolls of the sugary candy known as Smarties is going viral through youth culture, particularly among our elementary and middle-school-aged kids. The potentially dangerous practice has become so prevalent, that school districts are now sending home letters of warning to parents in an attempt to make them aware of this risky trend.

In order to “smoke” or snort Smarties, kids crush the candy into a fine powder. After pouring the powder into their mouths, they blow the dust out of their mouths, mimicking a smoker’s exhale. Others are mastering the ability to send the dust from their mouths up into their noses, thereby allowing them to exhale through their nostrils. Online videos show Smarties smokers blowing smoke rings, and in some cases, hacking away like a habitual smoker from a Smartie induced coughing fit.

In a nod to snorting cocaine or other illicit drugs, kids will pour the powder out onto a hard surface, and then use a straw or rolled-up dollar bill to snort “lines” or piles of Smartie dust into their nasal cavities. Health experts warn that this kind of imitation could indicate a curiosity or fascination with illicit drug use, and even serve as a warning sign for future drug use. . . perhaps even in the not-so-distant future.

Parents need to know that there are no known benefits or highs that come from snorting and smoking Smarties. At this point, it’s purely an imitative behavior that’s spreading through youth culture. Many kids believe it makes them look “cool.” But medical professionals are sounding warnings about potential risks.

We recommend that you talk with your children about Smartie snorting and smoking. Ask them if they’ve encountered the practice, heard peers talking about it, or even engaged in it themselves. In an effort to encourage them to steward the God-given gift of their bodies to the glory of God, warn them of the following dangers.

As always, we recommend that parents exercise their God-given responsibility and right to guide and direct their children into responsible, healthy behaviors. Exercise a preventive influence by talking to your kids about the dangers and risks associated with Smartie snorting and “smoking.”