Welcome to the inside of my head. There’s something that happens in there every year about this time. It began happening some twenty years ago when I found myself listening to a variety of college commencement speeches. I found myself shaking my head in disbelief at some of the advice that was being thrown about to young women and men launching into the rest of their lives.  .  . advice that seemed to be rooted in stuff that ultimately leads to a lifetime of self-focused despair as opposed to other-focused flourishing. 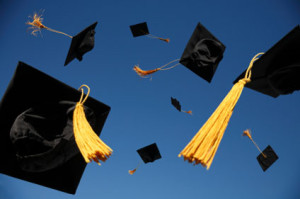 Then someone asked me who spoke at my own college graduation. . . and I couldn’t remember either the person, or what they said. I don’t think I’m alone in this, am I?

Then, I started getting asked to speak at high school and college graduations. . . which in essence, is an invitation to have both your self and your words quickly evaporate into the ether of oblivion. Of course, I had to come up with a speech. Painful, to say the least.

And so, every year at this time I both track what’s being said at graduations, and I imagine what I might say that would be valuable, memorable, helpful, concise, clear, truthful, and an investment in helping those who are younger pursue true human flourishing while living lives that matter. It’s a kind of fun little exercise that in many ways is mostly for me, myself, and I. In other words, it’s stuff I wish someone had told me when I was graduating, as well as stuff that I need to continue to hear every day.

“Class of 2015. . . it’s not going to work out the way that you are hoping, planning for, dreaming, or imagining. How do I know that? The same way that every single adult my age who was once sitting where you’re sitting today knows it.

You are sitting there today with a script that you believe is going to play out for your life. You’ve written that script. I had a script way back in 1978. It was a good one. It was good because it was smooth, full of pleasure, and void of pain. But in the years since then, God has given me a different script. It’s a script filled with a lot more difficulty, disaster, surprises, and suffering than I ever could have imagined being able to weather. But you know what, I wouldn’t trade this script for anything. Seriously. It’s far better than the script I had dreamed up for myself. The reason? God’s gift to me of His script for me has slowly forced myself out of myself and into Him. Whether I’ve known it or not, that’s where all my yearnings have pointed. . . and in His grace and time, He’s taking me there.

So, the best advice I can give you today is this. . . immerse yourself in a quest to faithfully follow the incarnate Word (Jesus) into every nook, cranny, and second of your life. And, immerse yourself in a never-ending quest to faithfully know and love the written Word where God has revealed His will, way and story (the Bible). And as you engage endlessly and passionately with both, continually pray these three prayers:

Now, sit back and enjoy the unfolding of His script!”