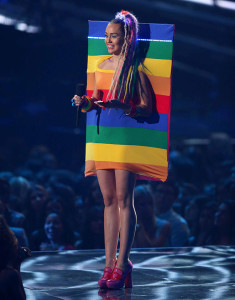 We drill it home all the time here at CPYU. . . Culture is a map and a mirror.  As a map, it guides us through life. . . telling us what to believe and how to live in the world. As a mirror, it reflects back to us things that we might pass over, ignore, or otherwise miss. While it’s much more complex than this, youth culture in its most basic sense maps out life for our kids. For those of us who are adults, it helps us see the maps our kids are following so that we can offer biblical affirmation or correctives where needed.

And then there was last night’s MTV Video Music Awards. . . a map taking our kids right into the midst of a massive moral, ethical, spiritual, and lifestyle train wreck.

I watched from start to finish. I took notes. I went to bed. . . and could hardly sleep. This morning, I’m trying to gather and record my thoughts. . . and I’m not sure where to begin, what to say in the middle, or how to bring it all to a conclusion. I’ve watched since the first VMAs aired in 1984. Since then, the envelope has stretched far beyond whatever one could think or imagine. Last night, it stretched so far that I wonder how close we are to our cultural snapping point.  A couple of hours into the show I posted these words on Facebook: “I don’t think it’s a matter of my age. Rather, I think it’s the accelerated rate of cultural change. Tonight’s VMAs are an example of how our celebration and embracing of brokenness is increasing. Sadly, most will watch and enjoy as it’s all been normalized. Many will watch and learn. . . then emulate. It is more over the top than ever. I feel grief. . . and a sense of urgency regarding telling kids the truth. . .”

So as my head spins this morning and while it will take a significant amount of time for me to think/discuss it all through to the point of making some kind of sense out of the non-stop three-ring morally-chaotic-circus that was last night’s VMAs, here are some initial dis-jointed thoughts. . . and I would love to hear your thoughts too (comment, please, if you will). . .

And that’s just the start. there’s so much more. Of course, watching the VMAs or any other cultural artifact like it should end for us in action. The map and mirror should result in marching orders. So, here’s what I’m thinking about today in terms of our response. . .

Again, I apologize for the disjointedness of my thoughts and comments. For those of you who can venture into this year’s VMAs, it’s all online for you to watch. Do so prayerfully.

To go back to what I said at the top. . . about the map and mirror of youth culture, this little intro piece that was used last night to introduce Kanye West’s Video Vanguard Award speaks powerfully about the power of culture and the artists who make it. Let it shape your response. . .