Last evening I found myself glued to a fascinating and frightening discussion unfolding on Philly Sports Talk, a daily one-hour show on our local Comcast Sports Network that features lively chatter about what’s happening in the world of sports. When you combine “Philly” with “sports,” it’s bound to be lively. 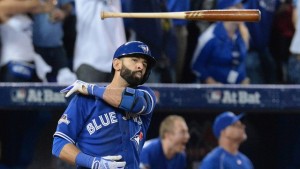 The discussion that grabbed me debated “how far is too far?” when it comes to sports and the celebrations of individual achievements. The discussion was sparked by what has now become known as the “bat flip of all bat flips,” performed by the Toronto Blue Jays’ Jose Bautista after his homer put the Blue Jays ahead in the ALDS final and deciding game. Another less noteworthy but equally controversial celebration was brought into the discussion. It was Sunday’s “touchdown flip” performed by the Philadelphia Eagles’ Josh Huff as he scored on a pass from from Sam Bradford.

The chatter on Philly Sports Talk was filled with disagreement. In Bautista’s case, it’s a well-known matter of baseball etiquette that a post-homer bat flip is an in-your-face statement of braggadocio. The same with Huff’s end-zone flip in the world of football. The fact that these things are not only happening more and more and are even accepted, expected, and celebrated should be troubling. It tells us that we have collectively moved beyond good sportsmanship and conduct in the way we play. Winning and letting our opponent know it in no uncertain terms has trumped civility and respect. And perhaps most troubling, an entire generation being raised to worship sport and its’ heroes is being taught to emulate these role models. . . something that’s happening more and more on playing fields that play host to games among even the youngest of our kids.

Of course, many will push back and argue that it all happens in the emotion of the moment. But the reality is that the values we adopt and how we choose to exercise foresight to prepare ourselves for how we will react when the moment comes. . . well. . . it’s out of the overflow of a heart that’s had a lifetime of preparation for that moment that either humility or narcissism speak.

One of the Philly Sports Talk pundits issued some statements that are quite telling. He looked into the camera and told us all that there’s absolutely nothing wrong with the way Bautista, Huff, and others celebrate in over-the-top “look at me!” ways. He said that we live in a “generation me” “me-first” culture and world. In other words, this is to be expected, accepted, and even celebrated. He didn’t go on to say “emulated,” but the inference was clearly there. So sad.

Just because something is expected, accepted, and celebrated doesn’t make it right. The apostle Paul made it clear that followers of Jesus are to be counter-cultural (Romans 12). We are to live by a different set of standards and rules. We are to be people whose lives are marked by kindness, grace, and humility. We are to play hard, do our best, and humbly/joyfully celebrate our victories (think Joe Carter in 1993 and Kirk Gibson in 1988). But to do our best and then celebrate by indulging our in-your-face pride is anything but who we are called to be. In today’s world, more and more of us are doing our best in ways that are not who we are at our best.

A game-winning home run and a huge touchdown will soon be forgotten. But the lessons learned in how we do those things will live on in generations to come. Perhaps that’s why we should seize these teachable moments, turn to our impressionable young kids and simply say, “Don’t ever do that.”

For a related story, take 60 seconds and listen to today’s edition of “Youth Culture Today” where we think about “Football and Disrespect.”