Baseball’s old guys have every right to speak up about honoring the game. . . especially those who played it so well for so long. They’ve earned their right. And we should expect them to do so when the integrity of the game is being compromised at the level of how it’s being played. To use the excuse that “culture is changing” as justification for ever-increasing displays of “hey! look at me!” hubris among today’s players is ridiculous.

Fact is, every athlete who steps onto the field in today’s world will have young eyes looking on and learning. Kids are looking at you. . . which means that you now have an even greater responsibility to take your position as a role model more seriously than ever. Athletes are role models whether they like or not. And the power of their position should cause them to relentlessly pursue a model that’s changing culture for the good, rather than for the self-centered. 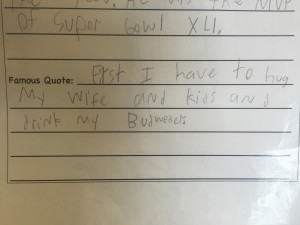 Earlier this week I was reminded of just how much kids catch by watching the pros. A third-grade teacher shared this wonderful photo from an assignment one of her kids wrote on Peyton Manning. There it is. The kids are watching. . . and they aren’t missing anything. The see what you do and they hear what you say.

Yesterday, one of my childhood heroes, Hall-of-Famer Mike Schmidt, spoke up about honoring the game. His op-ed piece is titled “Emotion on the field OK, just don’t cross the line.” After a few months of reflecting on Jose Bautista’s epic bat-flip last October, Schmidt correctly deconstructs Bautista’s actions as a kind of cultural artifact that’s about so much more than just a momentary action. I blogged on the bat-flip shortly after it happened, seeing it as one more evidence of just how rooted disrespect, arrogant individualism, and the resulting showboating have become in today’s culture. That’s no great insight on my part. Rather, it’s a simple recognition of the obvious. The proof is coming as arrogant displays of bravado will become more frequent and brash on youth baseball diamonds as the years pass. 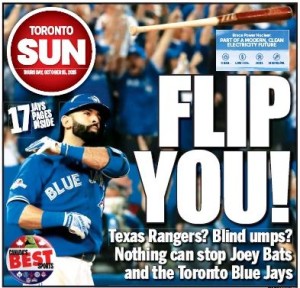 This morning, while reading some of the social media push-back on Schmidt’s commentary I ran across this tweet from a baseball fan: #mikeschmidt can bite me! Toss it again @JoeyBats19 can’t wait for the season to start @BlueJays. Wow. Perhaps that’s Exhibit A on this whole matter!

And so as Major League Baseball gets ready to throw out the first pitch on another season, it might be a good thing for baseball’s present-day stars and players to take a moment to ponder what Mike Schmidt has to say. Parents should be reading his words too. Then, translate them in age-appropriate ways to your kids who are playing any kind of organized or backyard sport. Here’s Schmidt’s article. . .

The subject of major league players having the freedom to let it go and express themselves emotionally on the field came up in our coaches’ locker room this spring. Understand, nearly all of us are old school, having played in a time when even the slightest out of character display was construed as showing up the opponent.

We all came through an era where respect for the opposition and a high level of decorum was normal. None of us ever knew any different. We emulated those who preceded us, guys like Lou Gehrig, Hank Aaron, Stan Musial, Al Kaline and Mickey Mantle. From my era, it’s easy: Johnny Bench, Steve Garvey, Dale Murphy,George Brett, Robin Yount and Cal Ripken.

It’s easier to name a few exceptions — Ty Cobb from way back comes to mind. My era had a few. Pascual Perez, who pitched for the Braves, was hated because of his antics on the mound. Al Hrabosky, aka “The Mad Hungarian,” had his post-warmup ritual that drew attention. And remember Willie Montanez, he made every play with an added showboat touch.

If you watched the great Roberto Clemente, you’d see a flair for stylish play. The most intimidating and emotionally gifted player ever probably was Pete Rose. No player ever incited the opponent and ignited his team more.

Why do so many players today feel the need to embellish their success with some sort of hand signal to the dugout? What got more attention in last year’s postseason than a bat toss by Jose Bautista? Pointing to the sky is child’s play compared to that moment in the postseason on national TV. A flagrant disrespect of the opponent like that would have gotten somebody hurt back in the day. . . (continue reading the rest of the article here)