Several years ago I embarked on a little journey into the world of advertising to get a better sense of how marketing has shaped body image pressures and expectations for our girls. I began by looking at marketing efforts to women who were a part of my grandmothers’ generation. . . those born at the dawn of the 20th century. It became clear to me why I remember both of my grandmothers wearing the same clothes, shoes, and hairstyles day after day in more of a utilitarian manner. Clothing seemed to be functional rather than impressive.

Then came the 1950s and 1960s. . . the years that shaped my mother’s generation. . . which was the first generation after that of my grandmothers. My oh my how things had changed. Marketing reflected that. Ads that had reflected the functional and utilitarian approach to clothing now took on more of a “clothes make the person” bent. . . which was a brilliant maneuver as it created a retail environment marked by an emphasis on fashion and the kind of planned obsolescence that created more money-making opportunities. And when the marketing was designed to both feed and then tap into a woman’s anxieties and aspirations regarding body shape and style. . . well, the ridiculousness that has led to our current body image obsession was launched.

As I scrolled through a growing collection of ads targeting my mother’s generation I was horrified by the messages that were both explicit and implicit in two ads from the times that represented this trend quite well. . . and there are some unmistakably strong messages here. . . tragic. . . 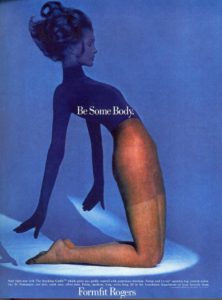 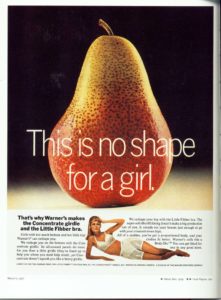 I think it’s fair to say that messages about body shape have actually mis-shapen how we think about our identity, value, and worth. Social media has upped the ante. And now, with disordered eating and body dysmorphic issues off-the-charts. . . well, we need to push back with the truths of Gospel and what it means to find one’s identity in Christ.

On today’s episode of our newly re-booted and re-launched daily one-minute radio spot, Youth Culture Today, I deliver a message specifically to moms regarding the powerful influence they have on body image. Give it a listen. . . and pass it on to the moms you know and love. . .