If you’re sick of it all, I don’t blame you. There’s so doggone much of it out there vying for our time, attention, and dollars that it’s absolutely overwhelming. It lulls us into a perpetual stupor. And, who knows what to believe anymore. . . but we still believe. . . and then we act. . . perhaps more often than not on false news. We are, as Neil Postman once wrote, “amusing ourselves to death.”

All this is front and center in my feeble little mind today as I’m still processing the invitation I received to pray publicly as yesterday’s National Day of Prayer event here locally. . . and to pray specifically for the media.

When the event’s organizer issued the invitation, he asked me to spend about 10 minutes prior to my prayer talking about what’s happening in the media that warrants our prayers. And so, I began by asking this question: “Why pray for the media?”

My answer focused on our kids. It made me think back to almost 30 years ago when the father of a 13-year-old boy came to me during one of our CPYU seminars and asked this question: “How can I expect my 13-year-old son to hear the still small voice of God with all these other voices screaming in his ears, ‘Come and follow. Come and follow.’?” 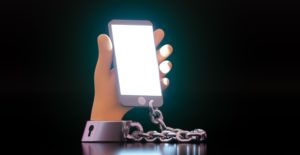 That question has echoed through my head and served as a motivator for our CPYU mission ever since that day he asked it. We’ve been working hard to identify, understand, and answer those voices through our work here at CPYU.

Yesterday, I told attendees that there was some research conducted several years back that sought to identify the institutions that have the greatest influence on the values, attitudes, and behaviors of our vulnerable children and teens. In the 1960s that institution was the family. By 1980 the family had been passed by the friend/peer group. And now? Without a doubt, it’s the media.

The latest stats (already outdated and most likely low) indicate that for our tweens ages 8-12, they are spending on average about 6 hours a day engaged with media. That number rises to 9 hours a day for our 13 to 18-year-old teens. And lest we scratch our heads in disgust and disbelief at the amount of time media takes up for our kids, we as adults surpass them both with about 9 hours and 15 minutes a day.

At it’s most basic level, the inevitable process of nurture of children and teens will be based on one of two narratives: either the cultural narrative or the biblical narrative.  That leads us to ask the question, “Which narrative is most prominent in the lives of our kids?”

If we do the math based on the statistics, our 8 to 12-year-olds are engaged with media (the main outlet for the cultural narrative) for about 2,190 hours a year. Our 13 to 18-year-olds are engaged with media for a whopping 3,285 hours a year! And if our kids are involved in two hours of formal Christian Education a week (assuming one hour in church worship and one hour in what most used to call “Sunday School”), that adds up to 104 hours a year.

A bit of an imbalance, for sure.

Among all the messages that the cultural narrative sends in today’s world, there are three that I mentioned yesterday. . . three powerful narratives that shape the beliefs that result in behaviors. . . both now and for the rest of one’s life.

First, there are the ideologies. This is the stuff of worldview formation. In today’s world the message is one that convincingly tells us that our highest and most noble goal in life is to be true to yourself. It results in the spread of narcissism, idolatry of self, and expressive individualism. That’s what got us into trouble in the first place, isn’t it?

Third, there is the pressure to fabricate, curate, and promote our image that is seen by the world. Social media has ramped this up quite a bit. We’re raising a generation of kids who have allowed the cultural narrative to convince them that “I am what I look like. . . and what people think of me.”

The result of all of this is that we have a generation that is lonely, anxious, stressed, and depressed. Before I even stood up to speak yesterday, the individuals asked to pray for education (two local educators) ran through a discouraging litany on the emotional and situational state of the kids in their schools.

So. . . why pray for the media? All we have to do to be motivated in this direction is to think about our kids.