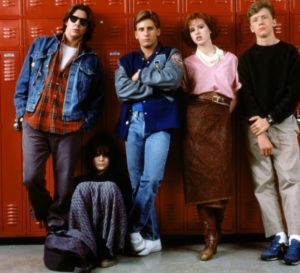 Are you kidding me?!? Nope. Thirty-six years have passed since “The Breakfast Club” was released into theaters on February 15, 1985. A little search revealed that all of the main actors in the film are in their fifties. . . yep. . . you heard that right. . . except for one. Believe it or not, John Bender’s Judd Nelson is in his sixties.

As a youth culture watcher, I’ve developed a special place in my heart for movies. French film director Jean-Luc Godard once said that “a film is the world in an hour and a half.” For those of us who need to keep developing our knowledge of the world of kids, movies offer a great window into that world.

Perhaps my favorite of all-time is this timeless classic from John Hughes that still captures the hopes, dreams, angst, ups, downs, and dynamics of adolescence in captivating ways. I’ve watched it so many times that cuing it up is like walking through the door to visit a group of friends. No other film has done a better job deepening my sensitivity to kids who face difficult issues. Sure, it’s a film filled with stereotypes. The most moving scene? When Judd Nelson’s John Bender pours his heart out about his family. Wow. I always walk away from this one with a better sense of why I’m called to youth ministry.

Perhaps today is a good day to watch an old classic as a reminder of humanity’s deep brokenness. . . and the life-giving Good News of the Gospel.