The constant parade of reminders that physical death awaits us all came knocking on my door again last evening. My college friend, Dr. Gayle Copeland, posted these words on our class Facebook page: “Dr. Norman Carson passed into his eternal reward today.” 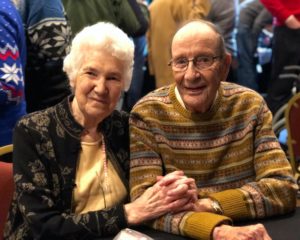 As I have done so many times over the last year, this news forced me to pause and think through the many memories I have of the one who has gone to be with Christ. Dr. Carson was one of my professors at Geneva College. His impact on my life became increasingly evident with each year that passed since I graduated. It’s like that isn’t it? True positive influence is not always known during the years when you’re listening so that you can answer correctly on a test. Rather, it’s when it matters in life that you pause and reflect back on the investment someone made in your life. . . even though you might not have realized it at the time.

While sitting and pondering this news, I grabbed my phone and Googled “Norman Carson Geneva”. I was hoping to find a recent picture. What came up first was a link to Dr. Carson’s LinkedIn  page. Much to my surprise, second on the list was a link to a blog I posted back in 2014 reflecting on a way in which Dr. and Mrs. Carson’s experience with a gay son, a son I knew, served and taught me well about God’s grace, providence, sovereignty, and love. Reading through what I wrote seven years ago reminded me of great lessons learned. It also modeled wise parenting for me. The Carson’s saw my post and eventually we corresponded about it, which was a real treat for me. Perhaps you will find something helpful as well. Here it is. . .

December 10, 2014 – For many years, I subscribed to Entertainment Weekly magazine. It was part of my regular culture-watching routine in those pre-Internet-glut-of-information years. Twenty years ago, in December of 1994, the magazine published their annual “Faces of AIDS” tribute to those in the entertainment industry who had died of AIDS during the previous twelve months. I remember sitting in my basement office (pre-being-able-to-afford-a-real-office years) and thumbing through the magazine tribute. Up to that point in my life, I was not aware of anyone that I knew who had died of AIDS. As I glanced through the article, the face and reality of AIDS suddenly became very personal for me. There, looking at me from the page, was the face and name of “Mark Carson,” a fellow Geneva College student who had graduated two years ahead of me. Since Geneva was a very small private college, Mark was someone I knew. I also knew his younger siblings who attended Geneva. . . something that was not at all surprising since their father, Norman Carson, was an English professor at the school. He too, was someone I knew as I had sat in many of his lectures over the years. Suddenly, AIDS had a face and a family.

In many ways, I was stunned. At that point in my life, remnants of the horribly naive belief that “these things don’t happen to Christians. . . certainly not to Christians that I know” surfaced, a reality that served as a much-needed gut-check of my theology, both regarding our tendency to make sinful choices, and the fact that the rain does indeed fall on both the just and the unjust. Seriously, I thought I had long-since moved beyond that point, but the reality is that the fact that this disease and this death visited this family convinced me that I was still not where I should be in regards to my understanding of pain, suffering, and the sovereignty of God. 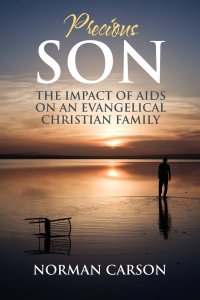 Two nights ago, I drove down to our church for a meeting. While I was waiting for the meeting to start, I wandered into the darkened church library, turned on the lights, and surveyed the books on the “new books” table. One particular book caught my eye: Precious Son: The Impact of AIDS on an Evangelical Christian Family, by Norman Carson. I picked it up, signed it out, and brought it home. . . reading it before I went to bed.

This was not a story. . . but a story about people I knew. I didn’t need pictures other than the memories in my head. The other night, I read this book differently than I would have twenty or thirty years ago. I read as one who has been on a deliberate and targeted journey for the last two years to understand homosexuality and the Christian faith. I read as one who knows, thankfully, that life isn’t as black and white or ridiculously simple as I once believed. I read as a parent who has seen deep brokenness in himself and in his family. . . a parent who wonders how to best understand and respond to brokenness and suffering in ways that are biblically faithful and that bring honor and glory to God. I read as one who because of his vocation, has deep and difficult conversations with a growing parade of people he meets as he fulfills his calling in life.

Today, as I can’t stop thinking about Mark Carson’s story and the father who has told it so well, I am grateful for Norman and Beverly Carson’s vulnerability and candor. Our Geneva College world was one where a certain unhealthy breed of theological dogmatism, fundamentalism, legalism, and judgmentalism could easily take root and breed more of the same if we weren’t open to understanding the full counsel of God. At times, I must admit, this is the kind of shameful thing that I chose to allow happen to me. To be honest, it still happens. But in the midst of that Geneva environment, we were also taught a rich theology of God’s sovereignty, providence, and grace. Fact is, it usually takes the difficult journey through suffering to get us to realize just how sovereign, providential, and graceful God is. In this way, suffering is a gift.

As I read Precious Son, I thanked God for the Carson’s vulnerability and willingness to share their story. . . a story which, I know, is shared by an ever-growing host of broken parents who struggle to raise broken kids. It’s all of us really, isn’t it?

I love these words that Norman Carson penned in the book’s Afterword: “When we look back to that August morning in 1994 we remember vividly how the death of our firstborn caused both of us enormous suffering and long-term grief. We must testify, however, that through God’s grace he eventually brought joy back into our lives. . Still, as we look back at those first dark months we ask ourselves how and why did this happen to us? Furthermore, we have often asked, how did God prepare us for this overwhelming tragedy? Believing in the God of providence, we came to believe that he had been preparing us for this event through the circumstances of many prior years.

As evangelical Christians, we take the injunctions of Scripture seriously, and so we found ourselves, inevitably, bearing the shame of having a son who had chosen to practice homosexuality. More devastating, however, was the crushing question of his final destiny, for he had gone to the grave , as far as we knew, still rejecting the Christian faith. We never tired of sharing with each other our sorrow, comforting and encouraging one another and reminding ourselves of God’s promises. We had to learn to live without our son and to overcome our guilt, for we thought we had surely failed him. It was difficult to understand that God was working in and through us. We prayed for the balm of healing so that we could go on with our lives serving God in the Kingdom. . . We never turned our face away from God. . .  We can truly say that God has been good to us though we still live with earthly sorrows that we cannot understand. . . We have come to believe that the two realities – of grief and of joy – can be shared in our life.”

And then this. . . “Now a word to Christian parents, remember this: no matter how hard you try to bring your children to God; no matter how faithful you may be in the nurture of your children, the choice ultimately must be your child’s. And remember this well: although we are not perfect, your Lord is. If we are obedient to his commands, faithfully teaching our children about him, hope remains for us and for our children. In God’s providence, our children can turn to him, even on their death-bed, because, because we have not neglected to teach them the truth.”