It is potent and powerful. It’s the soup of youth culture that our developmentally vulnerable children and teens swim in every day. One “ingredient” that’s been in the mix for the last nine years is Miley Cyrus. Now 22-years-old, she was dropped in the soup by Disney back in 2006 when she took on the role of Hannah Montana.

When we talk about youth culture here at CPYU we always say that it serves as both a map and a mirror.  Culture is both directive and reflective. So, when we talk about the seemingly ever-present and always-envelope-stretching Miley Cyrus, we would say that her values, attitudes, and behaviors map life for our kids. . . teaching them what to think, what to believe, and how to live in the world. But Cyrus is also an interesting case study because we’ve watched her grow up. Her life stages and how she’s been mapping life for our kids is fascinating (and frightening) because her values, attitudes, and behaviors have morphed over the years as a result of being a kid swimming in the youth culture soup herself. 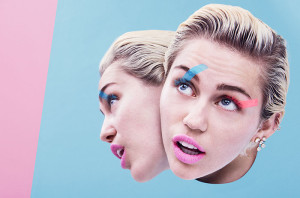 So today, she’s in the news again. This time it’s a cover story in “Paper Magazine.” The article, “Free To Be Miley,” offers a powerful, in-your-face textual and visual peek into who she is and what she believes. (Note: I have purposely not linked to the article here as the photographs of Cyrus are blatantly pornographic in nature). The article rolls out like a map for life.

A search of our CPYU website will take you to a variety of blogs I’ve written over the years as we’ve been tracking the youth culture map and mirror known as Miley Cyrus. Among there are May 2010’s “Miley’s Metamorphosis. . . Surprised?” in which I link to an eye-opening article on “How To Make A Pop Star.” Then there’s “Miley Cyrus. . . Have You Been Listening?” from later that year. Since then I’ve blogged on “Miley, Lindsay, Truth, and Grace. . . ,” “Transformation Complete? . . . Miley Cyrus’s Wrecking Ball and the Gospel,” and “Miley Cyrus. . . Another Teachable Moment.”

Today, I’ve read the latest from Miley Cyrus in “Paper Magazine,” and I’m sad. I’m sad for her. I’m also sad for the kids who thoughtlessly embrace her as a role model, teacher, and map. She is shaping youth culture, young hearts, and young minds. God has gifted us with so much more and so much better.

It’s easy to grieve over Miley’s values, attitudes, and behaviors. For me, my faith, my children, and my grandchildren are filters through which I see Miley Cyrus, and I am sobered. But being sobered should always lead to action. And so I want to encourage you to 1) Pray for Miley Cyrus (“God, make yourself real to this young lady. . .”), 2) Pray for the children you know and love (“Lord, reveal yourself, your will, and your way to our kids. Make them hungry to know the incarnate Word Jesus and your revelation of yourself in the Scriptures. May their hunger be insatiable!”), and 3) Know and unashamedly speak the Truth that transforms.

Yes, God is sovereign and in control of all things. He has not and will not abandon His Creation or His people. What a blessed assurance. That’s great news!

But what should make us grieve are the realities reflected in words written by Carl Henry over 25 years ago: “When all is said and tried, modern man’s alternatives are either a return to the truth of revelation, even to the Bible as the unpolluted reservoir of the will of God, or an ever deeper plunge into meaninglessness and loss of worth.”

“Lord, give us, our kids, and Miley Cyrus meaning and hope.”

(Here’s an article on “How To Make A Pop Star”)